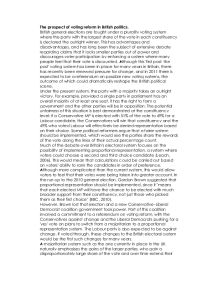 British general elections are fought under a plurality voting system where the party with the largest share of the vote in each constituency is declared the outright winner. This has advantages and disadvantages, and has long been the subject of extensive debate regarding claims that it locks smaller parties out of power and discourages voter participation by enforcing a system where many people feel that their vote is discounted. Although this 'first past the post' voting system has been in place for many years in Britain, there has recently been renewed pressure for change, and in 2011 there is expected to be a referendum on possible new voting systems, the outcome of which could dramatically reshape the British political scene.

Under the present system, the party with a majority takes an outright victory. For example, provided a single party in parliament has an overall majority of at least one seat, it has the right to form a government and the other parties will be in opposition. The potential unfairness of this situation is best demonstrated at the constituency level: if a Conservative MP is elected with 51% of the vote to 49% for a Labour candidate, the Conservatives will win that constituency and the 49% who voted Labour will effectively be denied representation based on their choice. Some political reformers argue that a fairer system should be implemented, which would see the parties share the rewards of the vote along the lines of their actual percentage count.

Much of the debate over Britain's electoral system focuses on the possibility of implementing proportional representation, a system where voters could choose a second and third choice candidate (Leach, 2006). This would mean that calculations could be carried out based on voters' ability to rank the candidates in order of preference. Although more complicated than the current system, this would allow voters to feel that their votes were being taken into greater account. In the run-up to the 2010 general election, Gordon Brown suggested that proportional representation should be implemented, since it "means that each elected MP will have the chance to be elected with much broader support from their constituency, not just those who picked them as their first choice" (BBC, 2010).

However, Brown lost that election and a new Conservative-Liberal Democrat coalition government took power. Part of this coalition involved a commitment to a referendum on voting reform, with the Conservatives against change and the Liberal Democrats pushing for a 'yes' vote on plans to switch from a majoritarian to a proportional representation system. The Labour party is also expected to be against change. If voted through, these changes to the British electoral system would be the first such changes for many years.

A majoritarian system such as the one currently in place in the UK naturally emphasises the gains of the larger parties, who gain a disproportionately large share of the vote and over time extend their natural advantage even further. For example, in the 2005 UK general election the dominant Labour and Conservative parties received 67.6% of the total vote between them, but won 85.9% of seats in parliament. For the third-placed party, the Liberal Democrats, the situation was particularly poor: they received 22.1% of the vote but only 9.6% of the seats.

Critics of this system argue that it is totally unfair, concentrates power in the hands of a two-party system, and marginalises minority parties in a way that makes it virtually impossible for them to grow and challenge the dominant parties. For this reason, Labour and the Conservatives have traditionally been unenthusiastic about changing this system, while the Liberal Democrats have pushed for reform.

The debate over voting reform takes place against a backdrop of dwindling voter participation at general elections. Most political analysts stress that keeping voter numbers up should be a priority (Kavanagh, Richard, Geddes and Smith, 2006), and supporters of electoral reform believe that proportional representation would encourage people to believe that their vote would not simply be wasted. However others argue that getting people to engage with politics is far more complex and that most people are unengaged not because of the specifics of the voting system but because they do not have faith in politicians.

No voting system is perfect and there will also have to be some compromises. However proportional representation seems to offer the best return based on the smallest compromise, and the current majoritarian system in place in Britain not only cements the power of the main two parties but also makes people believe that their votes do not count. Because of these fundamental flaws, it would seem to be a positive move if the British system were to be changed and a new way of determining the winner of general elections could be found.