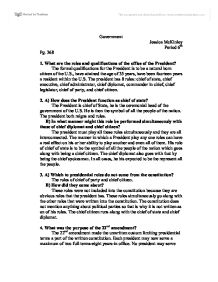 The Role and Functions of the US President.

Government Jessica McKinley Period 6th Pg. 368 1. What are the roles and qualifications of the office of the President? The formal qualifications for the President is to be a natural born citizen of the U.S., have attained the age of 35 years, have been fourteen years a resident within the U.S. The president has 8 roles: chief of state, chief executive, chief administrator, chief diplomat, commander in chief, chief legislator, chief of party, and chief citizen. 2. A) How does the President function as chief of state? The President is chief of State, he is the ceremonial head of the government of the U.S. He is then the symbol of all the people of the nation. The president both reigns and rules. B) In what manner might this role be performed simultaneously with those of chief diplomat and chief citizen? The president must play all these roles simultaneously and they are all interconnected. ...read more.

4. What was the purpose of the 22nd amendment? The 22nd amendment made the unwritten custom limiting presidential terms a part of the written constitution. Each president may now serve a maximum of two full terms-eight years-in office. No president may serve more than ten years in office. This amendment came into play because the leaders did not want a president to reign forever and become like a king. 6. Do you think the pay and benefits with which the president s compensated are adequate and appropriate for the job? Why or why not? no. I think that the President should be the highest paid person in our country. He gets many fringe benefit but his salary 400,000 dollars. I think the President should be able to have a higher salary than an athlete who just puts a ball through a hoop or an actor. The president runs the country so h deserves the many benefits he gets. ...read more.