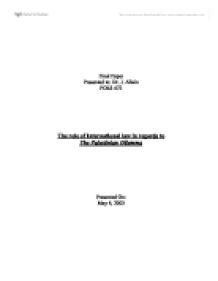 The role of International law in regards to The Palestinian Dilemma.

Final Paper Presented to: Dr. J. Allain POLS 472 The role of International law in regards to The Palestinian Dilemma Presented On: May 4, 2003 "To be Self-Determined, is to endorse one's actions at the highest level of reflection. When self-determined, people experience a sense of freedom to do what is interesting, personally important and vitalizing"1. The right to self-determination is an indisputable right that should be enjoyed by every human being as long as they have the opportunity to exercise it. It does not only imply the most basic human rights but has also been confirmed in vital documents dealing specifically with such an area, for instance article 1(2) of the UN charter that states the following To develop friendly relations among nations based on respect for the principle of equal rights and self-determination of peoples, and to take other appropriate measures to strengthen universal peace. Further, such a universal right has also been mentioned in numerous international documents like for example the 1966 International Covenant on Human Rights and the 1960 Colonial Declaration2. The many resolutions passed by the UN General Assembly and the establishment of the UN "Committee on the Exercise of the Inalienable Rights of the Palestinian People" by the Assembly in 19753 are clear proof of the general recognition of this right in regard to the people of Palestine. The Palestinians have enjoyed this right as a natural right not just since the time after the Second World War, but since a time well before the collapse of the 19th century orders in the course of the First World War. As a matter of fact and a record of history, the Palestinians enjoyed such a right even during the period of ruling of the Ottomans and prior to the establishment of the League of Nations. At the end of World War I and in the course of the detachment of Palestine from the Ottoman Empire, the Palestinian people were seen as a community whose existence as an independent nation could be "provisionally recognized", especially as mentioned in the Covenant of the League of Nations4. ...read more.

General Assembly resolution 3236 (XXII) of 22 November 1974 reaffirmed the "inalienable rights of the Palestinian people in Palestine including (a) the right of self-determination without external interference, (b) the right to national independence and sovereignty." This right was reconfirmed in General Assembly resolution 169 A (XXXV) of 15 December 1980, which stated that just and lasting peace in the Middle East cannot be established without the attainment of the inalienable rights of the Palestinian people. The right to self-determination has been spelled out very clearly and consistently in all General Assembly resolutions on Palestine since the time after the 1967 war.20 It is an ironic case that the General Assembly itself, in 1947, has created the problem by adopting a resolution in its 1st special session that was entirely dedicated to the Palestinian problem, which was based on the negation of that very principle. It should be noted, however, that the General Assembly membership in 1947 was not at all representative of the peoples of the world-at a time when the majority of the present members did not exist as sovereign entities-and that the colonial powers of the time completely dominated the decision-making process. There was definitely a lack of legitimacy of the partition resolution in terms of international law and a lack of political legitimacy of a body that represented only a minority of the people of the world. The numerous resolutions of the General Assembly reaffirming Palestinian rights, because of the limited competence of this body, are merely recommendations. It is notable, however, that the Security Council's resolutions on the question of Israeli occupation of Arab territories were never adopted on the basis of Chapter VII of the Charter. All these resolutions, contrary to resolutions dealing with Arab countries such as Iraq and Libya, are of non-binding nature21. This clearly demonstrates that the United Nations Organization, representing the global power balance, has not been allowed to deal with the Palestinian issue on a legal basis. ...read more.

Evidently, the European Bloc should gradually liberate itself from the role of being a follower rather than a leader for the implementation of projects and strategies defined by the United States. Whereas the continued domination over the Arabs through the neo-colonialist or neo-realist policies of divide and rule - by means of sanctions and other political dictates - may lead the region closer to a major conflict, the establishment of a truly sovereign Arab entity in Palestine (including Jerusalem) could be the decisive factor in securing a lasting order of peace in the entire region. The settlement of the Palestinian question on the basis of real self-determination (not merely Israeli-sponsored "self-rule" over isolated pockets of territory) could be the catalyst of a "new order" of co-operation and partnership guaranteeing equal rights to the Arab world and its neighbours. Though this may sound like a rather idealistic assumption at the present moment, there is no alternative to an otherwise bleak outlook of confrontation and economic stagnation in the whole region. No "Final Status Agreement" will be effective and enforceable vis-�-vis the people of Palestine if this basic wisdom is ignored. There is no alternative to the unequivocal recognition of Palestinian sovereignty if one honestly upholds the cause of peace in Palestine (as we tried to explain in legal and political terms at the same time). It is exactly for this reason that a new constitutional framework has to be created that goes beyond the legal notions of the Oslo agreements. Negotiations on such a framework should be facilitated by the international community as represented by the United Nations. Such a role can never be played by the one superpower with major strategic interests in the region. To sum it up: talking about peace or a "peace process" without at the same time fully acknowledging the Palestinian people's right to self-determination amounts to empty rhetoric. All political measures for a future settlement - that is referred to as "final status" in the many "trilateral" talks between Israel, the United States, and the Palestinians - have to take into account this basic legal principle. ...read more.