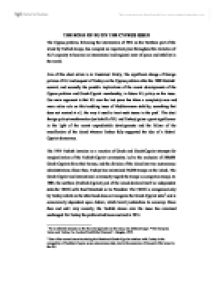 The role of the EU on the Cyprus issue

THE ROLE OF EU ON THE CYPRUS ISSUE The Cyprus problem, following the intervention of 1974 on the Northern part of the island by Turkish troops, has occupied an important place throughout the evolution of EU's capacity to become an international and regional actor of peace and stability in the world. Aim of this short article is to illustrated: Firstly, The significant change of foreign policies of EU and sequent of Turkey on the Cyprus problem after the 1999 Helsinki summit, and secondly the possible implications of the recent developments of the Cyprus problem and Greek-Cypriot membership, in future EU policy on the issue. Our main argument is that EU over the last years has taken a completely new and more active role on this troubling issue of Mediterranean stability, something that does not remind at all, the way it used to treat such issues in the past1. This dual foreign policy transformation (on behalf of EU and Turkey) gains a great significance in the light of the recent unpredictable developments and the failure of the reunification of the island whereas Turkey fully supported the idea of a federal Cypriot democracy. The 1974 Turkish invasion as a reaction of Greek and Greek-Cypriot attempts for marginalization of the Turkish-Cypriot community, led to the exclusion of 200,000 Greek-Cypriots from their homes, and the division of the island into two autonomous administrations. Since then, Turkey has maintained 36,000 troops on the island. The Greek-Cypriot and international community regard the troops as occupation troops. In 1983, the northern (Turkish-Cypriot) part of the island declared itself an independent state-the TRNC-with Rauf Denctash as its President. The TRNC is recognized only by Turkey-which on the other hand does not recognize the Greek-Cypriot state2-and is economically dependant upon Ankara, which heavily subsidizes its economy. Since then and until very recently, the Turkish stance over the issue has remained unchanged: for Turkey the problem had been resolved in 1974. ...read more.

When the Republic of Cyprus applied for membership, Turkish leaders were alarmed. Turkey insisted that the Cypriot application should be unacceptable to the EU. Turkey had hoped that accession negotiations with Cyprus would not be launched before the resolution of the Cyprus conflict. Ankara has stated repeatedly that it neither wants the Union to become involved in the Cyprus question, nor does it approve of the EU having an active role in the negotiations for settlement in Cyprus. As Greece is a member of the EU, Turkey was convinced the Union couldn't be impartial. When the European Council Luxembourg Summit declared that the EU would start accession negotiations with Cyprus and excluded Turkey from the list of candidates, the TRNC President Rauf Denctas and Mesut Yilmaz, the Turkish Prime Minister at the time, firmly indicated that this decision left them a single option: integration. The TRNC followed Turkey's path of breaking off all contacts with the EU. The European strategy to make a direct link of Euro-Turkish relations with the problem of Cyprus resulted in a very negative Turkish reaction, indicating that it was resulting in the opposite directions that it had been supposed to lead into. The Turkish stand moved further away from the idea that the solution of the Cyprus problem should be through the formation of a federation, a solution that after 1997 the EU has encouraged even more. Prior to the Helsinki summit, the EU strategy had been to pressure Turkey by highlighting that Turkey-EU relation could be improved if, among other things, Turkey contributed to the resolution of the Cyprus question that would reunify the island and lead to the accession of a federal Cyprus to the EU.8 The failure of the European Union to emerge as an anchor to Turkey's foreign policy on the Cyprus issue, and the opposite results that this tactic brought, led to a change of policy on behalf of the EU. ...read more.

Ashgate publications, 1999. 4 "enosis" represents the radical Greek idea of unification and integration of the whole island with Greece. It is based on the shared Ethnic identity of the Greek-Cypriot majority population of the island and the nationalistic vision of reunification of the Greek Nation. 5 For a coherent analysis on the EU new approach on the issue, see: Mehmet Ugur: "The European Union and Turkey: An Anchor/Credibility Dilemma". Ashgate, 1999. 6 One of the current issues burdening the Greek and Greek-Cypriot relations with Turkey is the recognition of Southern Cyprus as an autonomous state, due to the accession of the part of the island in the EU. 7 While it is not commonly agreed among scholars what is the exact level of the Greek influence on the EU stance on the Cyprus issue and the relations between EU and Turkey in general, it seems that at least there should be put a limit of the Greek factor thesis; an assumption that Greece was the most significant determinant of Euro-Turkish relations accords Greece with a degree of influence that neither deserves nor is capable of wielding within the EU. For similar arguments see: Mehmet Ugur: "The European Union and Turkey: An Anchor/Credibility Dilemma". Ashgate publications, 1999. 8 Semin Suvarierol: "The Cyprus obstacle on Turkey's Road to Membership in the European Union". Turkish Studies, Spring 2003 (Vol.4, No.1 9As finally revised, the Annan plan envisages a Swiss-style state called United Cyprus Republic having a federal government with a rotating presidency and two constituent states. It calls for a single international legal personality and sovereignty, with partition and secession expressly prohibited. The deal requires the Turkish side to cede about 7 percent of the island or roughly 18 percent of North Cyprus to the Greek side and would allow Greek Cypriots to gradually either return to their abandoned homes in the Turkish constituent state or be compensated for them. 10 Michael Emerson: "Has Turkey fulfilled the Copenhagen political Criteria?" CEPS Policy Brief No.48/April 2004. 11 Michael Emerson: "Welcome to Northern Cyprus-autonomous entity of the European Union". CEPS Policy Brief, April 2004. ...read more.