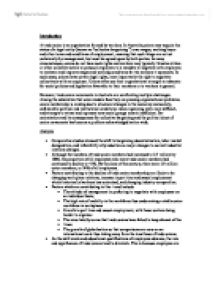 The role of trade unions

Introduction A trade union is an organisation formed by workers. In Australia,unions may acquire the status of a legal entity (known as "collective bargaining ") over wages, working hours and other terms and conditions of employment, meaning that such things are not set unilaterally by management, but must be agreed upon by both parties. In many circumstances, unions do not have such rights and workers may typically threaten strikes or other collective action to pressure employers to a mandate to negotiate with employers to maintain and improve wages and working conditions for the workers it represents. In such cases, unions have certain legal rights, most importantly the right to negotiate collectively with an employer. Unions often use their organizational strength to advocate for social policies and legislation favorable to their members or to workers in general. ...read more.

By the close of the century, there were 1.9 million union members, or 26% of all employees. * Factors contributing to the decline of trade union membership are likely to be changing work place relations, increase in part time and casual employment which historically has been less unionised, and changing industry composition. * Factors which are contributing to this trend include * The attitude of management in preferring to negotiate with employees on an individual basis; * The high rate of mobility in the workforce thus undermining a stable union workforce in workplaces * Growth in part time and casual employment, with these workers being harder to organise * The view held by some that trade unions have failed to keep abreast of the * times * The growth of globalisation so that comparisons are now on an international scale thus taking away from the local base of trade unions. ...read more.

They are now better educated after many of them being exposed to international markets. Yet the last remnants of negative union practises continue to persist in monopolistic public services like the state transport undertakings and electricity boards. The only way to correct this is to corporatise or privatise these undertakings or open them up to competition. For example the railway track in each region can be owned and operated by a company, which then allows competing companies to run their trains on these tracks. Similarly, there is no reason why urban bus services cannot be made more efficient by opening them up to competition. Today they are run as monopolies due to pressure from unionised labour. The important point is that unionised labour accounts for only a small portion of the total workforce. It should not stand in the way of policies that generate employment for the larger group outside trade union control. In the end, that is what will benefit everyone. ...read more.