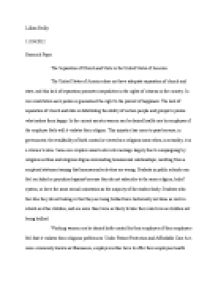 The Separation of Church and State in America.

﻿Lillian Reilly 11/24/2012 Research Paper The Separation of Church and State in the United States of America. The United States of America does not have adequate separation of church and state, and this lack of separation promotes inequalities in the rights of citizens in the country. In our constitution each person is guaranteed the right to the pursuit of happiness. The lack of separation of church and state is debilitating the ability of certain people and groups to pursue what makes them happy. In the current society women can be denied health care by employers if the employer feels will it violates their religion. This injustice has come to pass because, in government, the availability of birth control is viewed as a religious issue when, in actuality, it is a women?s issue. Same-sex couples cannot enter into marriage largely due to campaigning by religious entities and religious stigma surrounding homosexual relationships, resulting from a scriptural statement saying that homosexual activities are wrong. Students in public schools can feel excluded or prejudiced against because they do not subscribe to the same religion, belief system, or have the same sexual orientation as the majority of the student body. Students who feel like they do not belong or that they are being bullied have historically not done as well in school as other children, and are more than twice as likely to take their own lives as children not being bullied. Working women can be denied birth-control by their employers if their employers feel that it violates their religious preferences. Under Patient Protection and Affordable Care Act, more commonly known as Obamacare, employers either have to offer their employees health insurance or they must pay a penalty. ...read more.

In schools today children get bullied, and while some may argue that it is just part of growing up, bullying is wrong and no one has the right to it. Bill SB 3393 in Tennessee, and a similar bill in Michigan, would have given people a license to bully if they were bullying based on their religious beliefs (Neely, Senator Jim Summerville Reintroduces OK to Bully Based on Religion). Giving anyone a right to bully is wrong, no matter what the reason. Public schools are tolerant of all religions so using a religion as an excuse for the torment of another student is wrong and should not be accepted. The consequences of bullying have to be considered also, as in some cases children can commit suicide due to bullying. For example, a student could be bullied for his sexuality relentlessly at school and although it?s horrible to think about, he could commit suicide. If the mentioned bill was passed, the bully may not be held accountable because of his or her religious beliefs. Jessica Ahlquist, a Rhode Island resident who fought in her school district to abolish her school?s prayer display, has become a target of bullying in her community. (http://secular.org/, Ahlquist?s Experience Highlights Need for Religion-Based Bullying Protections). Because Ahlquist stood for what she believed in she has been bullied by peers, members of her community, and her state representative who publically referred to her as, ?an evil little thing? (http://secular.org/, Ahlquist?s Experience Highlights Need for Religion-Based Bullying Protections). Bullying based on religion can extend outside of the school, and the mentioned bill would have protected the bully, and not the victim because of the bully?s religious beliefs. In publically funded entity's today a person can still find numerous results of a lack of secularism, particularly in the schools that the nation?s children attend. ...read more.

The extremist group the Westboro Baptist church, which is famous for their ?god hates fags? campaign, viewed the repeal as America's ultimate damnation (Bradley, Westboro Baptist Church: 'God Hates Ohio State University). The ?church? began the campaign proclaiming that ?god hates dead soldiers,? and although most religious groups cannot be judged for this extremist group?s actions, they are an excellent example of how a religious group campaigns against a minority groups rights. No country can have a perfect, clean separation of church and state because many people are guided in politics by their religious beliefs. The religious institutions in america have too much influence on the government. Women?s individual access to birth control should not be compromised by their employers religious beliefs. Every women should have equal and full access to contraceptives. School is a stressful time for most students, bullying and religious discrimination, or discrimination due to the bully?s religious beliefs, can make it so much harder and can affect the way a child does in school. A child that gets bullied does not have equal opportunity as a child that is bully-free. Same-sex marriage is a hot topic right now and will be for quite some time. Denying the same rights to same-sex couples as you grant to everyone else promotes an air of inequality throughout the nation. By denying homosexuals the same rights as everyone else the government is proclaiming that they are not equal to everyone else, and that is wrong. Religious institutions putting money directly towards issues of government is a gross violation of the separation of church and state. Fortunately, in America we are constantly moving towards the future, and the future is brighter. The separation of church and state is constantly growing and equality is always expanding making the US a better, brighter, more equal place every day. ...read more.