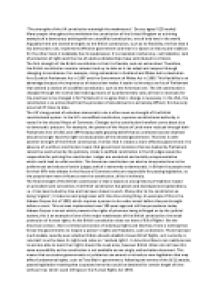 The strengths of the UK constitution outweigh the weaknesses. Do you agree?

﻿?The strengths of the UK constitution outweigh the weaknesses?. Do you agree? (25 marks) Many people throughout the worldview the constitution of the United Kingdom as a shining example of a democracy existing with an uncodified constitution, one of only two in the world. Arguably there are several strengths to the British constitution, such as its flexibility, the fact that it has democratic rule, implements effective government and that it is based on history and tradition. On the other hand, it debatably has its weaknesses: it?s occasional incoherency, centralization, lack of protection of rights and the rise of elective dictatorships have contributed to criticism. The first strength of the British constitution is that it is flexible, and not entrenched. Therefore, the British constitution remains relevant and up to date as it can adapt and respond through changing circumstances. For example, rising nationalism in Scotland and Wales led to devolution for a Scottish Parliament Act in 1997 and the Government of Wales Act in 1998. This flexibility is an advantage because the importance of statute law makes it easier to introduce an Act of Parliament than amend a section of a codified constitution, such as the American one. ...read more.

The final strength of the British constitution is that is based on a long history of tradition: based on precedent and convention, the British constitution has grown and developed over generations, i.e. it has been tested by time and has been shown to work. Many refer to the constitution as being ?organic?; it matures sand progresses with time like a living thing. An example of this is the Habeas Corpus Act of 1888, which requires a person to be under arrest before they are brought before a court. This act was implemented over 100 years ago and still has precedence today. Habeas Corpus is an act which prevents the rights of prisoners being infringed on by the judicial system; this is an example of one of the major weaknesses of the British constitution: the weak protection of human rights. As the British constitution does not have a ?Bill of Rights? like the American version, there is limited protection of individual rights and liberties; there is nothing that forces the governments to respect a person?s rights and freedoms, such as elections. ...read more.

This occurs mostly when the first-past-the-post voting system ensures that the House of Commons is usually dominated by a single majority party over which the government at the time has control, so can use parliamentary sovereignty as it wants. In 1997 Labour won a 179 seat majority under Tony Blair, who could almost always pass any legislation he wished and only lost few votes in the House of Commons because he always had the backing of the majority. This is a concern because elective dictatorships concentrate power in the hands of the executive and allows the government to control the shaping of the constitution as it wants. This not only creates the impression that there are no constitutional guidelines to follow but is extremely undemocratic. Overall, I agree with the statement that the strengths of the British constitution outweigh the weaknesses ? the flexibility and adaptability allows for it to be changed according to social and political outcomes and in positive circumstances I think that this is the best possible feature of the constitution, which keeps it current and up to date, a major plus. ...read more.