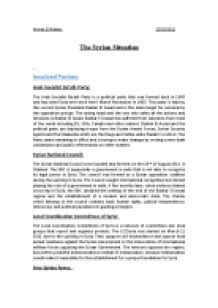 ﻿Ahmed El Wakeel 23/02/2012 The Syrian Situation Involved Parties: Arab Socialist Ba'ath Party: The Arab Socialist Ba'ath Party is a political party that was formed back in 1947 and has ruled Syria ever since the 8 March Revolution in 1963. This party is lead by the current Syrian President Bashar El Assad and is the main target for removal by the opposition groups. The acting head and the one who takes all the actions and decisions is Bashar El Assad. Bashar El Assad has suffered from sanctions from most of the world including EU, USA, Canada and other nations. Bashar El Assad and the political party are deploying troops from the Syrian Armed Forces, Syrian Security Agents and the Shabeeha which are the thugs and militia under Basahr's control. The Party seeks remaining in office and is trying to make changes by writing a new draft constitution and public referendums on other matters. Syrian National Council: The Syrian National Council was founded and formed on the 23rd of August 2011 in Istanbul. The SNC is supposedly a government in exile that is not able to recognize its legal power in Syria. The council was formed as a Syrian opposition coalition during the uprising in Syria. The Council sought international recognition but denied playing the role of a government in exile. A few months later, when violence started occurring in Syria, the SNC declared the seeking of the end of the Bashar El Assad regime and the establishment of a modern and democratic state. The charter which belongs to the council contains basic human rights, judicial independence, democracy and political pluralisms its guiding principles. ...read more.

The Arab Spring was a series of uprisings, protests and revolutions that took place in the Middle East. The Spring started with the Tunisian Revolution then slowly started a chain reaction through the whole Middle East. People started believing that it is possible to topple the unjust regime that ruled them for all this time and started waking up and going down to the streets to protest. Inspiration wasn't just regional but also local, for when people started seeing their family, friends, and people they know go protest, they were inspired and encouraged to go and do the same. The regional protests that occurred during the Arab Spring included Tunisia, Egypt, Syria, Yemen, Libya and some other countries. The inspiration has played a great and made a big contribution to the Syrian Revolution and the Arab Spring by starting a chain reaction that lead to the toppling of many corrupt regimes and the changing in the course of history for many soon to be great Arab Nations. Goals of the Revolution: Resignation of Bashar El Assad and his Regime: Off course, the main purpose of the revolution and the uprising in Syria is to remove Bashar El Assad from office and topple his regime. The people believe that the Bashar Regime is the cause and reason for all the undemocratic things and economically negative state in Syria. The Bashar El Assad regime has not only shown that they were incompetent with the presidency and the power in Syria, but they also have killed protesters and refused resigning from office and handing over control. ...read more.

They also do not want a return to stability, whatever form it might take, if they are to have no say in the new status quo. At the same time, they would much prefer it if this stability could be brought about without requiring any sacrifice on their part. For this reason they have been content to leave the ball in the court of those international bodies that have proved incapable of reaching a consensus on the non-military intervention being called for by the Syrian demonstrators, the Free Syrian Army, and certain sections of the formal Syrian opposition: i.e. international protection, no-fly zones, safe corridors, etc. They are even less certain about military intervention, despite the fuss made by the Syrian state media about an international plot to invade the country. It is a whirlpool dragging the country deeper into violence. At present the country is engaged in a minor form of civil war, that we can call a confined civil war. If the whirlpool is to be calmed, the regime still has the power to solve the crisis by stopping the slaughter, withdrawing its troops, releasing prisoners and inviting the opposition (as represented by those part of the uprising) to engage in a negotiated transfer of power. Without this the current polarization of the country will continue, the confined civil war will spread and international intervention ? perhaps under cover of an Arab initiative ? will be the inevitable result with the consequent destruction of the country. But will the regime see fit to act? Unfortunately not, it seems. It will stay its course, pulling down the temple on its own head and on Syria itself. ...read more.