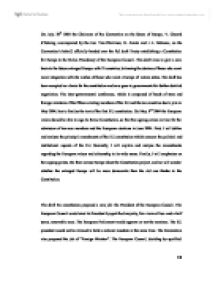 The treaty establishing a Constitution for Europe to the Italian Presidency of the European Council.

On July, 18th 2003 the Chairman of the Convention on the future of Europe, V. Giscard d'Estaing, accompanied by the two Vice-Chairmen, G. Amato and J.-L. Dehaene, on the Convention's behalf, officially handed over the full draft Treaty establishing a Constitution for Europe to the Italian Presidency of the European Council. This draft aims to give a new basis to the future enlarged Europe with 25 countries, balancing the desires of those who want more integration with the wishes of those who want a Europe of nation states. The draft has been accepted as a basis for the constitution and now goes to governments for further detailed negotiation. The inter-governmental conference, which is composed of heads of state and foreign ministers of the fifteen existing members of the EU and the ten countries due to join in May 2004, has to finalise the text of the first EU constitution. On May, 9th 2004 the European Union should be able to sign its Rome Constitution, so that the signing comes in time for the admission of ten new members and the European elections in June 2004. First, I will define and analyse the principal amendments of the EU constitution which concern the political and institutional aspects of the EU. Secondly, I will explain and analyse the amendments regarding the European values and citizenship in its wide sense. ...read more.

For this reason it seems logical that the future European constitutional treaty, aimed at achieving "unity in diversity" (cf. Preamble, � 5), should make explicit mention of the Christian roots of the continent." [www.europdebat.org; 07/11/03] [www.vatican.va]. Europe will then have to find which values it wants to convey, so that all the Europeans would recognise themselves in the new constitution, and they can share a common "line of conduct". Concerning sensitive questions like religion, it would probably be wiser not to talk about that more than the draft did, as it could raise polemics not really useful for the future Europe, as main European values have already been determined, so religious or not everyone can share them. As the respect for human rights is part of European values, the EU 's Charter of Fundamental Rights is set to become part 2 of the Constitution. But the proposals also include measures to make the European charter of fundamental rights legally binding and enforceable in courts, rather than just a statement of principle. As a result, Britain which has not got national written constitution, expressed reservations about whether the proposals would be compatible with national law [GIBBS, F.; 28/05/2003]. As at present, EU citizens will have the right to move freely within the EU. They will be able to vote in, and to run as candidates for, European Parliament and local elections whichever EU state they live in. ...read more.

The draft made considerable effort to turn Europe in a more democratic one, however there is still a lot to do to make Europe more transparent and easily understandable by the public. V. Giscard d'Estaing 's idea of teaching the constitution in schools may be a good idea to urge Europeans be part of the "Europeanization process". To conclude, we can say that the draft constitution raised debates across Europe. Concerning cultural matters, the main point of argument is religion, and the UK red line issue concerning the European Prosecutor. The major political proposals also brought up controversies, especially the amendment proposing the jobs of President of the European Council for a term of two-and-a-half years and the "foreign minister", and the proposal of change in voting system in the European Commission. Broadly speaking, small countries fear that the negotiation might lead to amendments to the advantage of big countries, because they keep trying to make their national interests prevail. For instance it is very likely that the President would come from a founder state, the new qualified majority voting will favour the biggest countries etc. It is undeniable that thanks to the constitution the new Europe will be more democratic, however it would have been a big step forward if European peoples could have elected their European President, or at least have been consulted on controversial European issues. Some countries will hold referendums on whether to ratify the draft constitution. If any country votes No, there may be a delay until a solution is found. ...read more.