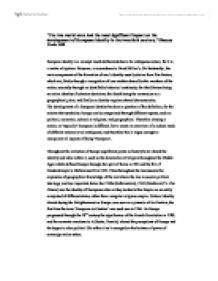 The two world wars had the most significant impact on the development of European identity in the twentieth century.' Discuss

'The two world wars had the most significant impact on the development of European identity in the twentieth century.' Discuss Words 1698 European identity is a concept much deliberated due to its ambiguous nature, for it is a matter of opinion. However, in accordance to David Miller's, On Nationality, the main components of the formation of one's identity usually derive from five factors, which are; firstly through a recognition of one another shared by the members of the nation, secondly through an identifiable historical continuity, the third feature being an active identity of cohesive decisions, the fourth being the connection to a geographical place, and finally an identity requires shared characteristics. The development of a European identity has been a question of the definition, for the nations that symbolise Europe can be categorised through different aspects, such as political, economic, cultural or religious, and geographical. Therefore classing a nation, as 'typically' European is difficult, for to create an overview of a culture made of different nations is too ambiguous, and therefore this is vague enough to incorporate all aspects of being 'European'. Throughout the evolution of Europe significant points in history have altered the identity and ideas within it, such as the domination of religion throughout the Middle Ages which defined Europe through; the split of Rome in 395 and the fall of Constantinople to Mohammed II in 1435. ...read more.

They continued to live their lives (as Europeans), absorbed in national and ideological struggles and in the maintenance and extension of their cultural heritage."3 These wars threatened the nature of being European and as such drew its citizens closer to protecting it, as Amin Maalouf states in On Identity "It can happen that some incident fortunate or unfortunate accident, even a chance encounter, influences our sense of identity more strongly than ancient affiliation."4 Thus the impact of the wars brought about a change in identifying one another based upon a new sense of recognition. The wars altered the diversity of nations, the second world war saw Hitler's persecution of Jews lead to mass extermination, and as this was discovered a new breed of acceptance emerged after the war, such as with the embracement of black's in America through the helping in the war effort and the acceptance of women and their movements, such as universal suffrage in the UK 'as women over thirty were enfranchised in 1918, and those between twenty-one and thirty in 1928.'5 For incorporating and accepting those diverse from oneself it led to a widening of a common identity through recognizable characteristics. "We customarily take gender, ethnicity, and class as given parameters and boundaries within which we create our own social identities."6 Therefore to understand issues on identity and how they affect and are affected by social, political ...read more.