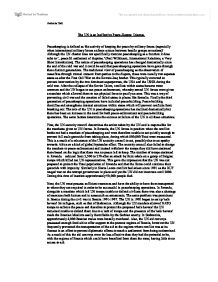 The UN is an ineffective Peacekeeper. Discuss

The UN is an Ineffective Peace-Keeper. Discuss. Peacekeeping is defined as 'the activity of keeping the peace by military forces (especially when international military forces enforce a truce between hostile groups or nations)' Although the UN charter does not specifically mention peacekeeping as a function it does refer to '...peaceful settlement of disputes.' (Paul Wilkinson, International Relations, a Very Short Introduction). The nature of peacekeeping operations has changed dramatically since the end of the cold war and it could be said that peacekeeping operations have gone through three distinct generations. The traditional view of peacekeeping as the observation of ceasefires through mutual consent from parties to the dispute, these were usually two separate states as after the First Gulf War on the Kuwait-Iraq border. This typically occurred to prevent intervention by the two dominant superpowers, the USA and the USSR during the cold war. After the collapse of the Soviet Union, conflicts within states became more common and the UN began to use peace enforcement, whereby armed UN forces were given a mandate which allowed them to use physical force to pacify an area. ...read more.

As a result of this the aid convoys were far less effective than they had the potential to be, with the regions of Bosnia which could have benefited from them the most, having little to no access to aid. Furthermore, it must be remembered that the UN is not an autonomous organisation. It is an intergovernmental organisation (IGO) which consists only of the member states and possesses no military of its own. Therefore in order for the UN to be successful, even if the security council is in favour of action, there must be support from other nations and the willingness to contribute militarily or financially to the cause. The force sent to monitor the ceasefire within the demilitarized zone on the border between Iraq and Kuwait in 1991 consisted of troops from many powerful and influential member states such as China, India, the Soviet Union and the USA. This aided in its relative success; the eventual withdrawal of UN troops in 2003 whilst maintaining a lasting peace in this area. Similarly, in East Timor, the UN was supported by Australia, working to prevent an influx of Indonesian immigrants which led to a peace agreement being reached and East Timor gaining recognition as an independent state. ...read more.

This led to Lumumba seeking assistance from the USSR and allowed the conflict to escalate when the USSR agreed to provide assistance in the form of weaponry. Another reason why the nature of the conflict could have an adverse affect on the effectiveness of the UN as a peace-keeper is that the nature of some conflicts can be deep and enduring despite actions to prevent them, examples being ethnic cleansing and religious conflict. Rwanda epitomises the idea that such conflicts are so prominent in the culture and history of an area -and in the case of Rwanda have been exploited by colonial masters- that it is unlikely that UN intervention will ever bring about a lasting peace. In conclusion in the area of peacekeeping the UN has a record of abject failures -the worst of which being the genocide in Rwanda and failure to change the status of Somalia as a failed state- punctuated with a few marginal successes such as running East Timor as a protectorate and the successful monitoring of the ceasefire on the Iraq-Kuwait border. Also UN intervention is most successful when conflicts are between two states and there is a clear distinction between the party which the UN should support and that which it should oppose. ?? ?? ?? ?? Antonia Dali ...read more.