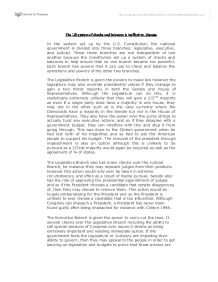 The US system of checks and balances is ineffective, discuss.

The US system of checks and balances is ineffective, discuss. In the system set up by the U.S. Constitution, the national government is divided into three branches: legislative, executive, and judicial. These three branches are not independent of one another because the Constitution set up a system of checks and balances to help ensure that no one branch became too powerful. Each branch has powers that it can use to check and balance the operations and powers of the other two branches. The Legislative Branch is given the powers to make law however the legislature may also override presidential vetoes if they manage to gain a two thirds majority in both the Senate and House of Representatives. Although the Legislature can do this, it is realistically extremely unlikely that they will gain a 2/3rds majority as even if a single party does have a majority in one house, they may not in the other such as is the case currently where the Democrats have a majority in the Senate but not in the House of Representatives. ...read more.

This action would be hugely embarrassing for the President and so the President is unlikely to ever choose a candidate that is too influential. Although Congress can impeach a President, a President has never been found guilty after being impeached for instance with Clinton 1998. The Executive Branch is given the power to carry out the laws. It several checks over the Legislative Branch including the ability to call special sessions of Congress over issues it deems as being extremely important and needing immediate action. If the government feels the Legislature or Judiciary are impeding their ability to govern, then they may appeal to the people in order to get backing on legislation and budgets to prove that those actions are required. This can often be hugely inefficient for the legislature and Judiciary as this means that if the President can gain enough support through media and his party base, then his actions will still be put through even though the other two branches may be against it. ...read more.

These instances show how the checks and balances can prove to be ineffective. The President can also take measures in foreign and security matters such as when the President didn't consult Congress over Louisiana Purchase, Civil War blockade, or even the Vietnam War. After 9/11 security measures showed that the President was taking big decisions which affect civil liberties without consulting either of the other two branches. This was also proven by Bush Jnr's decision to open Guantanamo bay and to hold trials of suspected terrorists within military courts. The American system of checks and balances has worked well over the course of America's history. Even though some huge clashes have occurred when vetoes have been overridden or appointees have been rejected, these occasions are rare. The system was meant to keep the three branches in balance. Even though there have been times when one branch has risen preeminent, overall the three branches have achieved a workable balance with no one branch holding all the governmental power. ...read more.

Some understanding of the checks and balances detailed in the Constitution is shown in this essay, but there are also some inaccuracies, careless use of language and limited evaluation. A 'discuss' question should be analytical. In what ways are the checks used effective? Do they do what they were set out to do or not? Much more emphasis on evaluating the checks (what's good and bad about them) is needed to improve.