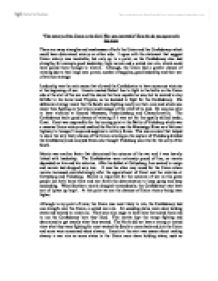 &quot;The victory of the Union in the Civil War was inevitable&quot; How far do you agree with this view

"The victory of the Union in the Civil War was inevitable" How far do you agree with this view There are many strengths and weaknesses of both the Union and the Confederacy which could have determined victory on either side. I agree with the statement that suggest Union victory was inevitable, but only up to a point, as the Confederacy also had strengths, for example good leadership, high morale and a united war aim, which could have pulled them through to victory. Although, the Union had a greater chance of winning due to their large man power, number of supplies, good leadership and their war of attrition strategy. Leadership was the main cause that allowed the Confederates to have numerous victories at the beginning of war. Lincoln wanted Robert Lee to fight in the battle on the Union side at the start of the war and this shows that how capable he was, but he wanted to stay faithful to his home land Virginia, so he decided to fight for the Confederacy. ...read more.

After his defeat at Gettysburg, Lee wanted to resign and morale had dropped very low. It was the other way round for the Union where morale increased overwhelmingly after the appointment of Grant and the victories at Gettysburg and Vicksburg. Morale is important for the outcome of war as this gives people (on both home front and war front) the determination to keep going and keep succeeding. When Southern morale dropped tremendously, the Confederacy may have sort of 'given up hope'. At this point we see the chances of Union victory being even higher. Although in my point of view, the Union was most likely to win, the Confederacy had one strength over the Union, a united war aim. All seceding states were slave holding states and wanted to remain so. They were also eager to have laws that suited them and to run the Confederacy how they liked. This motive kept the troops fighting and determined to get exactly what they wanted. ...read more.

They did not even have uniforms at the beginning of the war, resulting in great Confederate losses for example the death of Jackson who was a southern hero but was mistakenly shot by his own men. This shows how unorganized and inefficient an army can be without supplies and ammunition. This was an advantage for the Union over the Confederacy, again another factor that made the Union more likely to win. One of Grant's strategies was called War of Attrition, this meant that the Union should keep fighting and pushing the Confederacy back until the last man standing. This suggested that the Union would obviously win because their manpower was larger than the Confederacy so the last man standing would be a Northerner. All the factors made it inevitable for the Union to win. Although the leadership was good on both sides, what complemented the Union leadership was large manpower and high morale, which showed that the Union was in a better position of winning. The war of attrition strategy was also very good and it showed that in the end the Union would always win. ...read more.