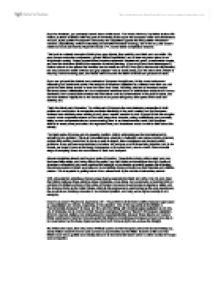 &quot;The World We're In,&quot; by British author Will Hutton - A discussion of America and the EU.

If you're American, you probably haven't heard of this book. "The World We're In," by British author Will Hutton, is aimed at Britons with the goal of convincing them to join the European Union as full members. As such, it pits positive "European" democracy and capitalism against the less positive "American" versions. (Specifically, Hutton is attacking conservative American ideology, but in the end, this doesn't matter so much; see below). I'll give the book a "+", but for rather complicated reasons. This book is a classic example of taking two gray objects, then painting one black and one white. Lily-pure Europe embodies compassion, growth without exploitation, and a clear long-term vision for an enlightened society. Vulgar (conservative) America represents unbalanced greed, questionable morals, and zeal for short-term profit at the expense of mature planning. (Can we get any more stereotyped?) Hutton notes in a few places that America has its merits and the EU "has yet to achieve its full potential", but why sweat the details of these two gray objects? One is clearly black, and the other white. Britain is heading down the wrong path, and Hutton aims to sound the alarm so that it can get back on track. If you can get past the rhetoric and unabashed European haughtiness, Hutton does make some interesting and worthwhile points. His analysis of American capitalism is a different view than you will get in the Wall Street Journal or even the New York Times. His biting criticism of America's recent tendency toward unilateralism and our companies' relentless focus on shareholder value should not be dismissed. He is correct that America has been taken over by conservatives in the past 30 years, and we have suffered mightily for it. And because of our global arrogance, other parts of the world are suffering too. That's the black part of America. The white part of Europe is its more balanced perspective in both politics and economics. ...read more.

Of all EU countries, UK social and economic policies and its respective performance receive by far the greatest amount of attention in this book. Hutton is critical of Great Britain's current US-inspired economic model for its past inability to build a social contract capable of producing outcomes similar to those implemented in mainland Europe, in particular when it comes to higher quality of public services, properly functioning public transport and decent social provision. There are, however, signs of things on the mend in UK, and he mentions the new Companies Law requiring directors to acknowledge obligations to the whole organisations they serve, rather than just their shareholders; new regulations in respect of pension fund trustees designed to engender a longer-term view of the companies in which they invest; increased corporate social and environmental responsibility; EU information and consultation directive involving workers in the process of corporate decision making. He qualifies though that transformation has been occurring in a piecemeal and unsystematic fashion there, a signal of still strong reluctance and distrust of the EU-driven change. Hutton posits that only when a growing, successful, politically accountable EU is achieved, and the reasons for its success are properly understood, will the Euroscepticism in UK and other European states be allayed. He argues that the UK is more similar to Europe than to the US and should therefore be looking more to Europe for solutions of its problems than across the Atlantic. The European system brings higher productivity, quality workers, organisational creativity and high social protection. It is based on income redistribution, social insurance, means tested social benefits, provision of public health and education that requires higher taxes and social security contributions than in the US, and on a combination of employment protection, labour market regulation and higher trade union representation. This model has not, he stresses, created higher unemployment as has been anticipated by some. The current global system, argues Hutton, disallows government autonomy and gives the maximum freedom to business, whatever the irrationalities and extravagant waste. ...read more.

Contrary to what he implies, this split did not begin with the election of George W. Bush but has it roots in the emergence of the post Cold War world. But there is no denying that under Bush the tensions have increased. They are in part economic (the emergence of US protectionism), in part conflicts of judge and interests (the so-called "Axis of Evil" issues) and increasingly about a very different way of seeing the future world order. Bush's America believes it is through the allegedly enlightened and benevolent unilateral exercise of its own power that its interests can be achieved. The Europeans believe that peace, justice and prosperity can only be assured by the creation of institutions of global governance and the rule of law to which even the most powerful states must be held account. Hence the bitter disputes over EU support for, and US opposition to the International Criminal Court, the Kyoto Agreement, a stronger UN and so on. It remains to be seen whether the combination of these differences push the European Union into a more independent definition of its own global mission. Where Hutton is right on target is his insistence that the left should dump its anachronistic opposition to closer European integration (again including the euro). He argues convincingly that the left has a vested interest in encouraging the emergence of a democratic, federal European Union. The right and capital have all the Europe they need. Labour and civil society need much "more Europe" to achieve their goals. This is why the left should be leading the demand for a democratic, federal constitution for the EU. This should include the right of citizens to elect future President of the Commission, an end to secretive, inter-governmental law making by EU governments in favour of an open, Parliament style legislature in Brussels, giving the already agreed Charter of Fundamental Rights legal force and many other reforms. Who knows, the next step could be the development of a serious trans-national European left with a strategy and programme for democratic global governance. ...read more.