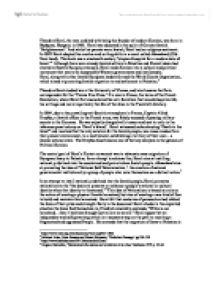 Theodore Herzl, the man credited with being the founder of modern Zionism.

Theodore Herzl, the man credited with being the founder of modern Zionism, was born in Budapest, Hungary, in 1860. Herzl was educated in the spirit of German-Jewish 'Enlightenment.' And whilst his parents were Jewish, Herzl had no religious sentiment. In 1902 Herzl adapted his creative and writing skills in a novel called Altneuland, (Old-New Land). The book was a nineteenth century "utopian blueprint for a modern state of Israel."1 Although there were already Jewish settlers in Palestine and Zionist ideals had existed in Eastern Europe previously, Herzl made Zionism into a cultural and political movement that was to be accepted by Western governments and intellectuals. Herzl, along with other Jewish European leaders formed the World Zionist Organization, which aimed at promoting Jewish migration to and settlement in Palestine.2 Theodore Herzl studied law at the University of Vienna, and later became the Paris correspondent for the 'Vienna Free Press.' It is was in France, the home of the French Revolution, where Herzl first encountered the anti- Semitism that would shape his life, his writings and more importantly the fate of the Jews in the Twentieth Century. ...read more.

Early in the document Herzl alludes to the exploited situation the Jews find themselves in; Friedrich miserably contends, "If this is our homeland...then it has been brought just as low as we are." Herzl argues that an independent and self governing nation is a necessary step on the path to reuniting a fragmented and oppressed People. He contends that the migration of Jews to Palestine is essential in preserving and enhancing the Jewish cultural identity. "What this land wants is water and shade... It might have an undreamed of future!" Furthermore, Herzl maintains that although Jewish tradition and the communal way of life appear to be vacant in many communities throughout Europe, "nobody can be deader than the Jewish people," and despite the fact that Palestine appears to be a bleak and barren country a "picture of desolation and neglect," the Jewish nation can be revived and reformed. Herzl paints a very optimistic account of Jewish traditions in Russia, and alludes to traditional Jewish customs, "If you came to us in Russia, you would see that there is still a Jewish nation...love for our past and belief in our future." ...read more.