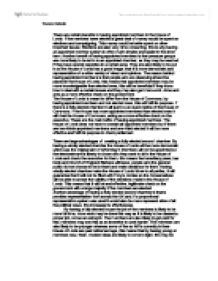 There are certain benefits to having appointed members in the House ofLords. If the members were elected a great deal of money would be spent onelections and campaigning. This money could be better spent on other importantissues. Elections are also ...

There are certain benefits to having appointed members in the House of Lords. If the members were elected a great deal of money would be spent on elections and campaigning. This money could be better spent on other important issues. Elections are also very time consuming, this is why having an appointed member system is often much simpler and easier in the short term. Another benefit of having appointed members is that pressure groups are more likely to be let in to an appointed chamber, as they may be needed if they have special expertise in a certain area. They are also likely to be put in so the House of Lords has a good image, that it is more democratic and representative of a wider variety of views and opinions. ...read more.

These are the main befits of having appointed members. The House of Lords does not have to contain all appointed members but if there are two-thirds appointed members and one-third elected it will be more effective and fulfil its purpose to check parliament. There are large advantages of creating a fully elected second chamber. By having a wholly elected chamber the House of Lords will be more democratic which was the original aim of reforming it. Members will not be appointed so the electorate are at liberty to chose who they want to sit in the House of Lords and check the executive for them, this means the hereditary peers, law lords and Church of England Bishops will leave, people who the general public did not choose to be in there and make decisions for them. ...read more.

The members are also likely to get paid for this; members may see this as an incentive to work harder. The members are also likely to be younger whereas some of the ex-MPs currently in thee House of Lords are past retirement age, this means that by having younger members new, fresh, modern ideas are likely to come to light, this may be advantageous in the long run. The younger members may also have more of a dedication to the job if they have gone through the election process. By setting up an elected second chamber it would show the government was committed to a bicameral legislature but, is this the function of the House of Lords, an exact replica of the House of Commons or is it meant to check government effectively as it does now with a mixture of people. These are some of the benefits of having a wholly elected second chamber. Yasmin Dubash ...read more.