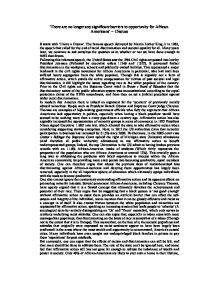 'There are no longer any significant barriers to opportunity for African Americans' ~ Discuss It starts with 'I have a Dream'. The famous speech delivered by Martin Luther King Jr in 1963, the speech that called for the end of racial discrimination and societal equality for all. Many years later, we continue to ask ourselves the question as to whether or not we have done enough to fulfill that dream. Following this infamous speech, the United States saw the 1964 Civil rights act passed into law by President Johnson (Followed by executive orders 11246 and 11375). It prevented further discrimination in the workplace, schools and publically owned facilities. This represented a major landmark in the civil rights movement for African Americans in particular, who had until then suffered heavy segregation from the white populace. Though this is arguably not a form of affirmative action, which entails the active compensation for victims of past societal and legal discrimination, it did highlight the issues regarding race to the wider populace of the country. Prior to the Civil rights act, the Supreme Court ruled in Brown v Board of Education that the discriminatory nature of the public education system was unconstitutional according to the equal protection clause of the XIVth amendment, and from then on set a judicial precedent against wider racial discrimination. ...read more.

They argue that by suggesting that a black person is 'not good enough' without affirmative action to assist them provides an artificial barrier that can affect the self-esteem and integrity of the individual, not to mention that it can be grossly offensive and racist as a concept in of itself. It also creates friction between the white population and minorities not represented by affirmative action, sparking an increasing tension that leads people to 'otherise' (A sociological term for actively distinguishing an 'Us' and 'Them' mentality), which only serves to reinforce underlying racist attitudes. One can also argue that, especially in urban areas with more cosmopolitan populaces, that discriminating on the basis of race is somewhat of a taboo (Though not to the extent that it is in Europe). This means that, on the face of it, the societal prejudices and attitudes that originally were expressed as racist sentiment appear to have been largely been eradicated in the areas where the most wealth and opportunity is concentrated, America's coastal cities. Many individuals have even sought out underprivileged black families in private to pay them 'reparations' for past misdeeds. But conversely, one can argue that the effects of racism and discrimination can still be felt, and that more should be done to address them. ...read more.

Barack Obama has been criticised by individuals like Jesse Jackson and Ralph Nader as somebody who has lost his identity as a black, instead adopting the language and personality of a white man. Though it might seem to be an inherently hypocritical thing to argue, that there is such a thing as 'acting white' and 'acting black', one cannot underestimate the effect that it would have on other cultures. If in order to succeed and gain wealth in society one must first act in a certain manner that does not befit the normative cultural identity of the individual, then that is a form of psychological oppression that can act as a barrier to opportunity for many. Elocution, grooming, diet and many other examples contribute to this phenomenon of oppositional culture. To argue that there are 'no significant barriers to opportunity for African Americans' is, in my view, misguided. Yes, a great deal of legal, judicial and executive power has been spent on defeating open discrimination and has even gone a long way to eradicating stereotyping and negative societal attitudes. However, many areas of the public space are still dominated by a stark inequality; the gulf in criminalisation rates alone demonstrates both an ingrained bias within the justice system aswell as an inherent sociological issue that prevents many African-Americans from realising themselves as productive members of society. ...read more.