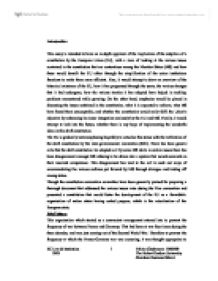 Introduction This essay is intended to have an in-depth appraisal of the implication of the adoption of a constitution by the European Union (EU), with a view of looking at the various issues contained in the constitution that are contentious among the Member States (MS) and how these would benefit the EU either through the simplification of the union institutions functions to make them more efficient. Also, it would attempt to draw an overview of the historical existence of the EU, how it has progressed through the years, the various changes that it had undergone, how the various treaties it has adopted have helped in tackling problems encountered while growing. On the other hand, emphasise would be placed in discussing the issues enshrined in the constitution, what it is expected to achieve, why MS have found them unacceptable, and whether the constitution would really fulfil the Union's objective by enhancing its closer integration zealously by the EU and MS. Finally, it would attempt to look into the future, whether there is any hope of implementing the wonderful ideas in this draft constitution. The EU is gradually metamorphosing hopefully to actualise this status with the ratification of the draft constitution by the inter-governmental convention (IGC). There has been general calls that the draft constitution be adopted as it by some MS while in certain issues there has been disagreement amongst MS refusing to be drawn into a system that would encroach on their reserved competence. This disagreement has lead to the call to seek out ways of accommodating the various redlines put forward by MS through dialogue and trading off among states. Though the constitution convention committee have been generally praised for preparing a thorough document that addressed the various issues raise during the Nice convention and presented a constitution that would foster the development of the EU as a formidable organisation of nation states having united propose, which is the actualisation of the European state. ...read more.

Notwithstanding, this has not answered the question of legitimacy of the community law, since supremacy was more or less accepted on the premise that it conformed with national legal system. This had been argued by Steiner, J. etal, when they argued that "the national courts have accepted supremacy of the community law on the basis of national legal provision, not on the provisions of the community law itself"19. However, this has been taken care of in the draft constitution. That has explicitly states that the laws adopted by union in the exercise of its competences shall have primacy over laws of MS20. Thus entrenching the supremacy of it laws over national laws and also conferring legitimacy on union laws. The legitimacy and supremacy of the union laws can also be derived form the legal personality21 grant the union by the constitution, which has elevated it to the status of a state. This has given the EU the legal leverage to stand among nations and negotiate on behalf of its members. However, this idea has been refuted be some states that want to retain the right to enter into bilateral relationship with third countries irrespective of the union having done that on their behalf. This fear of losing their right of negotiation has been because once the union assumes the overriding right on that, the states might be subsumed into the union no longer noticed in the outside world. Also the legal personality of the EU has granted it the status to be a member of the United Nations22. This may threaten the position of Britain and France in the Security Council later when states subsume into the EU. The ascension of new member and the effect of QMV The ascension of new members was the main point that necessitated the urgency with which the EU required a workable constitution, since it was considered essential that for the union to function efficiently with an increased number of members and more been expected. ...read more.