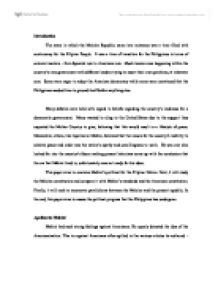 This paper aims to examine Mabini's political stance for the Filipino Nation.

Introduction The years in which the Malolos Republic came into existence was a time filled with controversy for the Filipino People. It was a time of transition for the Philippines in terms of colonial masters - from Spanish rule to American rule. Much tension was happening within the country's own government with different leaders trying to assert their own positions, at whatever cost. Some were eager to adopt the American democracy while some were convinced that the Philippines needed time to ground itself before anything else. Many debates were held with regard to beliefs regarding the country's readiness for a democratic government. Many wanted to cling to the United States due to the support they expected the Mother Country to give, believing that this would result in a lifestyle of peace. Meanwhile, others, like Apolinario Mabini, believed that the reason for the country's inability to achieve peace and order was the nation's apathy and unwillingness to work. He was one who looked far into the country's future making present historians come up with the conclusion that the era that Mabini lived in, unfortunately was not ready for his ideas. This paper aims to examine Mabini's political for the Filipino Nation. Next, it will study the Malolos constitution and compare it with Mabini's standards and the American constitution. Finally, it will seek to enumerate parallelisms between the Malolos and the present republic. In the end, this paper aims to assess the political progress that the Philippines has undergone. Apolinario Mabini Mabini had such strong feelings against Americans. He openly detested the idea of the Americanization. ...read more.

A similar message that appeared in a letter to American journalists dated 22 January 1900 (Mabini, p118) confessed that the Filipinos were fighting American forces to show them that far from being indifferent to the political situation, they made sacrifices for a government which will assure their individual freedoms and govern according to the people's desires and needs. Such utterances, although amicable in nature, were still infused with the strong desire for independence, the feelings against American sovereignty, and the indomitable spirit that accompanied their continued fight for complete independence. Indeed, Mabini was a force to reckon with. His weapons were his sword and his pen; the former showed the strength of his revolutionary cause, and his spirit in continuing the fight for his country; the latter, a less violent yet more pervasive tool in campaigning for the cause. Even during an exile to Guam for refusal to accept American sovereignty, he kept his revolutionary fervor intact. He also continued his fight using words. Through these two weapons, he proved his worth to the Filipinos as an indispensable figure in our history. Mabini saw that it was important to go back and examine the country's past, in order to recapitulate the falls, errors and weaknesses. For him it was a crucial step, and a laudable effort to amend and correct oneself. Apolinario Mabini did not fight like an unguided, sightless rebel, ready to pounce on an enemy on his way. Mabini's ways were calculated and well thought of. A shrewd man, whose knowledge on the technicalities of war and the revolution were acquired from books and his experiences, he gave such a huge impact in the development of the direction of the revolution. ...read more.

Having seen these flaws in our country's first Constitution, it can be said that there was indeed much room for improvement. It is possible to imply that the people who drafted the Constitution were self-serving. They constructed the laws in a vague manner, allowing them much room to maneuver in ways that would be most beneficial to their purposes. Further more, they appeared to be power hungry as manifested by their constant emphasis on a Filipino "representative" body rather than the Filipinos as a whole. This representative body formulated the Constitution in a way that kept the powers of governance concentrated within their group. It can be seen that as early as the 1890's the government officials were indeed prone to corruption. But the lust for power is reflected beyond the Constitution. Some of the drafters of the Constitution abandoned the very government that they helped establish by supporting the Americans when they saw that the foreigners were winning the war. Later they would become the federalistas, the political party notorious to the Filipinos for being pro-American during the American regime in order to gain the support of the new colonizers. But this is also the very party that shifted from being "pro-American" to "pro-independence" when the US government allowed parties other than the federalistas to exist. They did this because they did not gain any support they needed from the people. Such an attitude shows that these people did not have an ideal that they strongly believed in. They supported any policy that would best suit their interests, which was obviously holding on to power. Eventually, they lost grasp of it because the people may have realized that these illustrados were insincere in their service. ...read more.