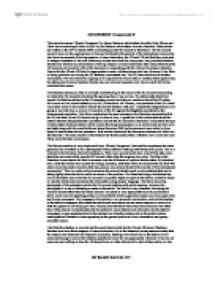 CITIZENSHIP- Coursework B This report compares 'Bloody Dangerous' by James Hardy an article taken from the Daily Mirror and 'Blair woos summit amid fears of split' by Ian Black an article taken from the Guardian. Both articles are written on the 16th of March 2002 commenting on the EU summit in Barcelona. The EU summit was at a focus on the ongoing issue of Iraq and its threat to the security of the international community. Iraq have bee accused of having weapons of mass destruction, the US and UK feel that they must send in weapons detectors to Iraq and disarm any nuclear arms that Iraq may poses. Iraqi president Saddam Hussain has declined any accusations of having weapons of mass destruction after many efforts buy the UN Iraq has not complied with all the demands in cooperating with the UN and its weapon detectors. Due to this the US and UK feel it is appropriate to send n military troops into Iraq. However Tony Blair is facing problems convincing the EU that they must attack Iraq. ...read more.

A great deal of the article talks about the clashes between anti-globalisation protestors out side the EU summit in Barcelona. It describes the type of action taken by the protestors which include throwing burning tyres on to a train track and bins were set alight along with the usual bottle and stone throwing. 8500 police personnel were called in from Spain to handle these furious protestors. Both articles mentioned the discussions between Mr Blair and Mr Schroder. The main concern in the articles was that the action taken if that be a war could and most likely would threaten world peace. The Mirrors headline is very simple and blunt, 'Bloody Dangerous', the headline emphasises the issue generally and is backed up by a photograph of the protestors clashing with the Spanish police. This is a contrast to the Guardian where the heading is, 'Blair woos summit amid fears of split' this talks more about the real event which was the EU Summit rather than the ongoing Iraq crisis. ...read more.

The language in the articles is very powerful and emotive, such as the heading of the tabloid newspaper; this makes the article and issue stand out and cause response in most of us. Both the papers do not really give Iraq a chance, and talk about when they should declare war rather than if they should. Understandably the broadsheet is more detailed and informative but the tabloid newspaper is more appealing due to the emphasis on dramatic events such as the protest clashes reading tabloid literature is more appealing to the general public as it has a dramatised and gossip orientated nature. I feel that the situation is very bad and the world should stick by the US and UK since if Saddam Hussian does have these weapons of mass destruction it is in the interest of work peace and safety that the weapons are disarmed and disposed of properly. Starting a war should be on the bottom of our minds and trying to resolve the situation peacefully would be very appropriate. However if Iraq do not cooperate and nothing is done the UN should have no other choice but to start military action on Iraq. BY SUMIT KAPUR 11Y ...read more.