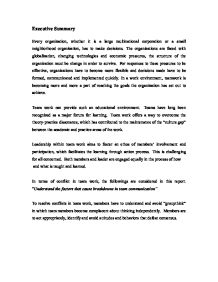 Executive Summary Every organization, whether it is a large multinational corporation or a small neighborhood organization, has to make decisions. The organizations are faced with globalization, changing technologies and economic pressures, the structure of the organization must be change in order to survive. For responses to these pressures to be effective, organizations have to become more flexible and decisions made have to be formed, communicated and implemented quickly. In a work environment, teamwork is becoming more and more a part of reaching the goals the organization has set out to achieve. Team work can provide such an educational environment. Teams have long been recognized as a major forum for learning. Team work offers a way to overcome the theory-practice dissonance, which has contributed to the maintenance of the "culture gap" between the academic and practice areas of the work. Leadership within team work aims to foster an ethos of members' involvement and participation, which facilitates the learning through action process. This is challenging for all concerned. Both members and leader are engaged equally in the process of how and what is taught and learned. In terms of conflict in team work, the followings are considered in this report. "Understand the factors that cause breakdowns in team communication" To resolve conflicts in team work, members have to understand and avoid "groupthink" in which team members become complacent about thinking independently. Members are to act appropriately, identify and avoid attitudes and behaviors that defeat consensus. Introduction This report encompasses six aspects of organizational behavior, that is team building, communication, culture, leadership, objectives and setting goals, and team work, which are considered to be the critical issues in providing guidance for people doing teamwork in organization, at university, or in community etc. Teams are playing an increasingly important role in the success of many workplaces in today's competitive and demanding society. In order to be a successful team, there are certain techniques that the team must possess and principles that must be followed. ...read more.

'When we speak, the speech is the message. When we write, the writing is the message. Different set of codes and symbols are used to convey the message in the communication process. * Output: The information thus sent in those codes and symbols are directed to a receiver who is to decode these into an appropriate information for further usage. Feedback: Feedback is the check on how successful we have been in transferring the messages as original as intended and this is the stage that determines whether the sent information is understood or not. (Stephen P.Robbins, Bruce Millett, Ron Caciaoppe, Terry Waters-Marsh - Organisational Behaviour) SENDER Channel: Message RECIEVER Input letter, fax, phone call, electronic mail, etc Output Idea Feedback Idea Brain down Brain down Brain down 2.2 Barriers to effective communication * Filtering: It refers to sender manipulating information so that it will be seen more favorably by the receiver. Filtering is mostly likely to occur in organizations in which there is emphasis on status differences and among employees with strong career aspirations. * Selective perception: It is the process in which the receiver in the communication process selectively see and hear based on their needs, motivations, experience, background and other personal characteristics. * Information Overload: When the information we have to work with exceeds our processing capacity, the result is information overload. Due to overload of information there is loss of information and less effective communication. * Defensiveness: When people feel they are insecure, they react in ways that reduce their ability to achieve mutual understanding and they would react like verbally attacking and making sarcastic remarks. * Language: Words mean different things to different people. Specialized terminology and technical terms may disturb and cause problems in effective communication. 2.3 Effective Communication Communication and organizational development tools are the fodder of many intellectual discussions. However, without action, all they collect is "mental dust" and no benefit Three tools to boost effective communication in a meeting * Circle Up: Ensure that no one person is the "head of the table" or in control of the discussion. ...read more.

The countries that best suit as example of these are the United States, Canada, Great Britain, and several African nations. (Holt. D and Wigginton. K., 2002) 3.7 Application - Uncertainty Avoidance In a group work, there are many things that involve uncertainty. The issue of uncertainty affect when choosing a topic, designating different responsibilities among group members and etc. A conflict may arise when people have different level of tolerance to these uncertainties. Some will be at ease and just pursue with the group work and some may refuse to pursue unless the uncertainty is cleared and become certain. In this situation, it is important for the entire group to understand each other's level of tolerance on uncertainty and work together as a group in order to be effective and efficient in progress as a group. 4. Leadership It is very important to have an effective leadership. A good leader can effectively lead subordinates and achieve himself. There are three conditions to be a good leader: the ability of leadership, the ability of trust and the ability of bringing up an outstanding goal. In this changeful Age, a manager who can make a definite strategic decision and give subordinates clear direction is expected. A real esteemed manager is the manager with leadership that can establish direction by developing a vision of the future, then align subordinates by communication this vision and inspiring them to overcome hurdles. (Robbins, et al. 2001, p.399) 4.1 Different kind of leader An excellent leader can affect his subordinates, just like an idol can influence the society. There are two kinds of leader, one is the "nominal leader" who owns the power that comes from the title, and always reprimands to his subordinates. The subordinates maybe seem very obedient, but would not to follow his command. The other is the "real leader" who maybe doesn't have a real title, but other people would like to follow his direction. The reason of the difference is the way of exerting power. ...read more.