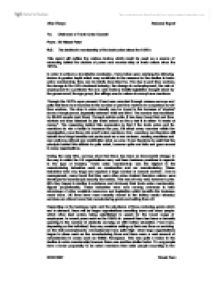 This report will outline the various factors which could be used as a source of reasoning behind the decline of power and membership of trade unions since the 1970's.

To: Chairman of Trade Union Council From: Sir Nitesh Patel R.E: The decline in membership of the trade union since the 1970's This report will outline the various factors which could be used as a source of reasoning behind the decline of power and membership of trade unions since the 1970's. In order to achieve a formidable conclusion, I have taken upon studying the following factors in greater depth which may contribute to the reasons for the decline in trade union membership, they can be briefly described by; The rise in part time workers; the change in the UK's dominant industry; the change in un/employment; the rate of employment in a particular firm (i.e. sole trader); hostile legislation brought about by the government; the age group; the willingness for unions to accept new members. Through the 1970's upon present, it has been recorded through census surveys and polls that there is an increase in the number of part time workers in comparison to full time workers. The drop in union density can be found in the increase of 'atypical' forms of employment, especially between 1995 and 2001. The number has increased by 58,000 people (part time). Through opinion polls, it has been found that part time workers are less reluctant to join trade unions as they feel it is either "a waste of money". ...read more.

Young people have a lower propensity to be union members than older people according to the labour force survey. In 1995 the union density was 53.3% among those under 30 years of age, and in 2001 it had dropped to 40.3%. There has also been an increase in the proportion of the workforce employed by small companies where it is often difficult for unions to be established. In comparison to larger firms, there is less reluctance for them to need a union to be heard by the owner or management. Usually if the employees are unhappy with something or feel as though they should be entitled to a raise, they would most probably carry out individual bargaining or have frequent meetings a few times a month to deal with issues. Trade union membership in Britain under the Thatcher and Major governments fell from over 13 million in 1980 to around 7 million in 1997. Collective bargaining density fell by around half as well. Legislation under the Conservative governments withdrew many statutory rights which trade unions had previously won, and imposed tighter and tighter constraints on unions and on their ability to take industrial action in disputes. The trade union act 1984 was introduced which allowed employers to sue unions if a strike was authorised without a secret ballot. ...read more.

I researched through many websites, textbooks and newspapers in order to gather relevant information within the allocated time limit. The sources from which I gathered the information from needs to be stripped from any bias views in order for it to stand as true "hard" facts, otherwise they aren't statistically valid. In order to increase the accuracy of the information gathered, I cross-referenced the acquired results through both the Internet and textbooks. I was able to see a similarity of dates and percentages at certain stages which either related or were totally oblivious. I picked out the relevant dates as accurate as possible to reduce typographical errors. By looking at the quantifiable statistics such as figures from percentages, I needed to be wary about 2 factors. The first factor was whether or not it could have been window dressed with intent to miss-lead the user therefore the data source would have led to bias. The second factor was to identify the sample size. We know that large samples are more statistically valid than small samples therefore further research may be needed to be gathered in order to strip the figures from any political or bias views. Organisations or government may want to distribute data and information to the public via the internet or textbooks so they can control what we see, therefore there should be an element of doubt at all times in making conclusive judgments. Miss Thorpe Business Report 02/05/2007 Nitesh Patel ...read more.