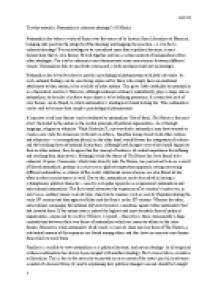 To what extend is Nationalism a coherent ideology?

﻿16/1/15 To what extend is Nationalism a coherent ideology? (45 Marks) Nationalism has taken a verity of forms over the course of its history, from Liberalism to Marxism, bringing into question the integrity of the ideology and begging the question ? is it in fact a coherent ideology? For an ideology to be considered more than a political doctrine, it must demonstrate that its core themes fit well together and has a certain amount of independence from other ideologies. For it to be coherent it must demonstrate some consistencies between different strands. Nationalism fails to meet both criteria and is both incoherent and not an ideology. Nationalism has been described as purely a psychological phenomenon with little substance. As such, national feelings can be seen being expressed by those who simply have an emotional attachment to their nation, or by a dislike of other nations. ...read more.

Although, while the theme of The Nation has been found to be coherent, Organic Community, which links directly into The Nation, has proved not to be as a result of liberal nationalists, perhaps in constructivist global-cooperation approach, seeing increasing different nationalities as citizens of the world. Additional inconsistencies are also found all too often in other circumstances as well. Due to this, nationalism can be described as having a schizophrenic political character ? seen by such polar opposites as expansionist nationalism and anti-colonial nationalism. The first strand advocates the expansion of its country?s border via, in most cases, military means in an obvious chauvinistic manner; such as seen by Napoleon during the early 19th century and then again by Hitler and the Nazi?s in the 20th century. Whereas the other, anti-colonial, campaigns for national Self-determination; sometimes against other nationalists that had invaded them. If the nation-state is indeed the highest and most desirable form of political organisation ? expressed by such by Wilson?s 14 points ...read more.

that colonial oppression is in fact an extension of the class system: the bourgeois in this context being the oppressing country and the would be independent nation-state the proletariat. In short, another ideology has to be coupled with nationalism to give it purpose and drive in its endeavours. Overall, the case for nationalism being a coherent ideology has been made in so far as it has been proved that it is not simply a psychological phenomenon. Beyond that, however, it can be seen that nationalism suffers from severe discrepancies within its core themes. It is safe to assert that when one strand of nationalism quite obviously violates the core principle of Self-determination, while another uses it to justify independence for its nation there is no coherently in the ?ideology?. To close, it is imperative that it is made clear that nationalism is a political doctrine ? onto which other ideologies can attach themselves to and explain nationalism in a way that makes sense to their core themes. ...read more.