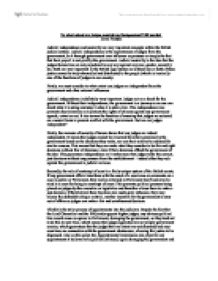 To what extent are judges neutral and independent?

To what extent are judges neutral and independent? (40 marks) Lewis Fairfax Judicial independence and neutrality are very important concepts within the British judicial system. Judicial independence is the separateness of judges from the government, be it through government over-influence or pressure or simply the fact that their payroll is not paid by the government. Judicial neutrality is the idea that the judges themselves are not prejudiced in any way against any race, gender, sexuality etc. Both are very important in the British legal system as without one or both of them justice cannot be truly channelled and distributed to the people (which is ironically one of the functions of judges in our country. Firstly, we must consider to what extent our judges are independent from the government and other external influences. Judicial independence is definitely very important. Judges act as a check for the government. Without their independence, the government is a tyranny as no-one can check what it is doing and stop it when it is ultra vires. This independence also prevents discrimination as it protects the rights of citizens against any government agenda, extant or not. It also serves the function of ensuring that judges are selected on a neutral basis to prevent conflict with the government. But are our judges independent? Firstly, the measure of security of tenure shows that our judges are indeed independent. It means that judges cannot be removed from their positions by the government based on the decisions they make, nor can their salaries be reduced for similar reasons. ...read more.

Thirdly is the fact that appointments are overseen by the Prime Minister. While the Judicial Appointments Commission is responsible for appointments, the PM has a veto on any recommendation they make. Again, this is a very theoretical risk (along with the Lord Chancellor), but cannot be ignored and could lead to government-controlled judges which would lead to a tyranny as no-one would check the government's actions. Finally, another argument against judicial independence is the presence of the Law Lords, who overlap the legislature and the judiciary, as they are the highest appeal court in the UK and yet they sit in the House of Lords and are involved in the legislative process. This means that their political and judicial independence isn't guaranteed - they are open to government influence. However, there are only 12 of them and they are being re-sited to a new building, the Supreme Court, in 2009. The link between their sitting in the Lords and lack of independence is fairly tenuous, without any evidence that this has occurred. So, to sum up, I would definitely conclude that our judges are definitely independent from external pressure in the UK. The security of tenure and contempt of court measures far outweigh the risks, which are by and large highly theoretical and unproven - after all, our government isn't a tyranny (yet!). Now we move on to the equally (and some might say more) important issue of judicial neutrality. This means that judges are socially representative, and not racist, sexist or otherwise internally prejudiced or discriminative. ...read more.

Many conservative judges may still be unbiased (indeed I presume they are). Secondly, judges are lawyers and tend to favour public order rather than individual citizens' rights, preferring to favour the interests of the state, which would suggest that they are biased towards the government. This was certainly true in the 1980s, in cases such as GCHQ. However, the recent trend of judges preferring to support human rights disproves this theory, and again is largely and individual and theoretical risk. The final point is that most judges are more conservatively-minded than liberal. In a similar position to the other arguments, this suggests that they may rule against liberals, socialists, communists, homosexuals, or trade unionists. However, the fact that both parties have criticised judges shows that the have no political bias. To sum up, the argument against judicial neutrality is largely a fallacy, assuming that just because a judge is conservative and upper class, they will discriminate against all those that are not like them. This is most certainly not true or our country would be a tyranny. I can only conclude by saying that judges are certainly neutral, with only maybe a little bit of bias that is not reflected in the verdicts of most judges. And in finally concluding, I can definitely say that judges in this country are independent and neutral. While there are some small points against independence that cause some doubt, most of the arguments against these two key principles are theoretical - and as such the arguments against are very strong that they are - our country is not a tyranny and our judges are independent, neutral and unbiased as well as free from government influence. ...read more.