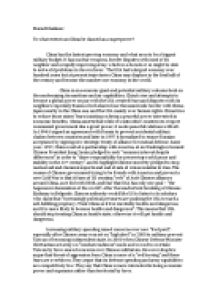 To what extent can China be classed as a superpower?

﻿Murad Khalimov To what extent can China be classed as a superpower? China has the fastest growing economy and what soon to be a biggest military budget. It has nuclear weapons, border disputes with most of its neighbor and a rapidly improving army, which in a decade or so might be able to solve old problems in its own favor. The USA had a largest economy over hundred years but at present trajectories China may displace in the first half of the century and become the number one economy in the world. China is an economic giant and potential military colossus bent on the modernizing its maritime and air capabilities. China?s rise and attempts to become a global power on par with the USA created fears and disputes with its neighbors especially Russia which shares four-thousand-mile border with China; Japan nearby in the China sea; and the USA mainly over human rights. China tries to reduce those states? fears insisting on being a peaceful power interested in economic benefits. China asserts that while it wants other countries to respect communist government due a great power, it seeks peaceful relations with all. In 1994 it signed an agreement with Russia to prevent accidental military clashes between countries and later in 1997 it formalized to ensure Russian acceptance by signing new strategic treaty of alliance for mutual defense. ...read more.

China?s resistance to its ASEAN neighbor?s effort evidences this attitude in 1995 to establish a nuclear-free zone in Southeast Asia. However, despite its aggressiveness and coercive diplomacy towards its neighbors, scandal with Chinese boat hitting the Japanese one but China put pressure on Japan to release captain and his team, China can be expected to be more concentrated on domestic and economic policies rather than military ones. It also tries to keep domestic stability by preventing any clashes inside the country that might tear apart national unity. One of the examples of it would be recent riot of Uyghur nation, which was angry on ignorance of Chinese authority on discrimination and security in their republic. Chinese government had to use force to prevent any further riots and waves of separatism in the country. Keeping situation inside the country stable and calm is a priority along with ?maintaining good and friendly relations with all countries? and avoiding becoming the next target of USA-led coalition assembled to contain its raise. Recently, David Cameron, Prime Minister of the UK has visited China in order to create some economic contracts and strengthen British economy. In order to so, he will probably undermine the importance of fact that Chine Nobel Prize winner Lin Xiabo is being put in prison for his calls for democratic reforms and human rights. ...read more.

Moreover, what China really lacks is Cultural influence in the world. USSR had communist influence on many countries and thus many support form communists believing in its power and ideology. USA had influenced everybody with liberal approach and democracy making it ideology number one in the world. Also American?s Hollywood films raised its reputation and ?brainwashed? many young people over ?American dream? and its values. In China?s case it has nothing to offer. Communism is not highly respected as before as it proved to be undemocratic and unstable system. Perhaps, as China is communist country with capitalist economy, introduction of Human Rights in the country might give China a sphere of influence but nowadays many commentators, thus questioning China being a superpower, cannot imagine it. In conclusion it can be said that although China has an enormous economic growth and power; biggest army in the world; raising influence in the world; rapidly growing military budget; dominance in Asia; Cameron?s visit to China, it cannot be classed as superpower due to its lack of Human Rights in the country and lack of Cultural influence. Furthermore its military spending and capabilities are still relatively low and thus still keeping it under ?superpower? status. However it can be said that in a few decades time, China has all the chances to become a superpower on par with the USA or even exceed it in power. ...read more.