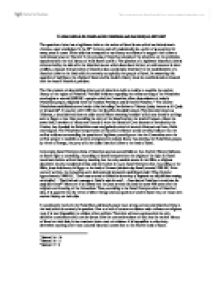 To what extent do the Israelis and the Palestinians each have history on their Side?

To what extent do the Israelis and the Palestinians each have history on their Side? The question of who has a legitimate claim to the nation of Israel is one which has incited much violence, anger and debate in the 20th Century and will undoubtedly be a point of speculation for many years to come. Either side has attempted to use history as evidence to support their claim to nationhood, however inherent in the process of historical analysis of the situation, are the problems associated with the rich history of Arab Israeli conflict. The question of a legitimate historical claim is often settled by the side with the historical source which dates back further, or which source is more credible, a myopic interpretation of historical data could easily lend itself to the establishment of a historical claim to the land which is currently occupied by the people of Israel. In answering this question of legitimacy the origins of Israel and its modern history must be examined and contrasted with the laws of historical precdent. The first element of determining either party's historical claim to land is to examine the ancient history of the region of Palestine. Veritable evidence regarding the earliest settling of the Palestinian area begins at around 3,000 BC a people called the Canaanites, direct descendants of today's Palestinian people, migrated from the Arabian Peninsula and settled in Palestine. ...read more.

Thus, according to the Israeli interpretation of historical data, it is apparent that by virtue of direct lineage and occupation of ancient Israel they are those with ancient history on their side. It would seem that both the Palestinian and Israeli people have strong cultural and historical links to the land which is currently in question. Due to a lack of concrete evidence and a reliance on religious texts it is near impossible to validate either opinion. Therefore without equivocation the only definitive conclusion which can be drawn from the contentious issue of who has the ancient history of Israel on their side, is that resultant form a lack of evidence it is impossible to effectively determine anything other than a shared historical connection to the Ancient land of Israel. The Jewish plea for legitimacy began in the 19th Century, a group of European Jews began to look for a single homeland for all Jews to escape the persecution they suffered throughout Europe and in the Arab world. The leaders of the movement, known as Zionism, considered Uganda, but eventually decided to return to the area known to their religion as Israel. The Ottomans allowed some immigration by Jews into the area, then known as Palestine, and the movement continued after the defeat of the Ottoman Empire by the British in World War I. ...read more.

used another means of coercion more applicable to the 20th Century, Israel lobbied the diplomatic community, it's allies and bombarded the media with the message that it deserved the rights to a homeland. "Israel followed in the footsteps of other regimes throughout history, the only difference was that diplomacy instead of bloodshed was the most effective technique4" Moreover not only did Israel manage to overthrow Palestine through expending it's diplomatic capital it has successfully maintained the integrity of it's borders since 1948, through use of intelligence, alliance and pre-emptive strikes Israel has staved off imminent threats from it's pro-Palestinian neighbors, through achieving this integrity Israel has fulfilled the second criteria of historical precedent and that is to maintain it's nation security and keep in power. In conclusion whilst either party in the Palestinian Israeli conflict could easily construct a case, using differentiating historical data, for having historical rights to today's Israel. However due to Israel's maintenance of territorial integrity and diplomatic pressure, historical precedent ensures that they have ultimately have all of history on their side and indeed the right to remain in Israel. James Robertson A.H.C 1001 1 Samuel 14 : 14 2 Samuel 16 : 11 3 Samuel 17 : 2 4 Anthony Bubalo Department of Foreign Affairs and Trade ; Australian Embassy Tel Aviv 14/10/02 ...read more.