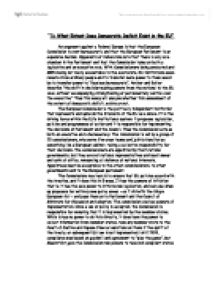 &quot;To What Extent Does Democratic Deficit Exist in the EU&quot;

"To What Extent Does Democratic Deficit Exist in the EU" An argument against a Federal Europe is that the European Commission is over-bureaucratic and that the European Parliament is an expensive burden. Opponents of federalism note that there is only one chamber in the Parliament and that the Commission takes on both a legislative and an executive role. With Commissioners being unelected and MEPs being not really accountable to the electorate, EU institutions seem remote from ordinary people and to transfer more power to them would be to transfer power to "faceless bureaucrats". Archer and Butler describe "the shift in decision making powers from the national to the EU level, without accompanying strengthening of parliamentary control over the executive." Thus this essay will analyse whether this assessment of the extent of democratic deficit, exists or not. The European Commission is the politically independent institution that represents and upholds the interests of the EU as a whole. It is the driving force within the EU's institutional system: it proposes legislation, policies and programmes of action and it is responsible for implementing the decisions of Parliament and the Council. Thus the Commission acts as both an executive and a bureaucracy. The Commission is led by a group of 20 commissioners, who serve five-year teams and jointly function as something like a European cabinet, taking a collective responsibility for their decisions. ...read more.

muster the 2/3rds majority vote to sack the commission, the very fact that the censure debate took place is probably more important than the final result. As it showed the Parliament was prepared to flex its newfound political muscles and as a direct result, the Santer Commission was forced to resign and a new Commission was appointed. Thus it would seem that though the Commission is made up of officials who aren't directly accountable to the people of Europe, there are certain new reforms that have limited the democratic deficit by giving new powers to the European Parliament, which is elected by the people. Thereby ensuring that the Commission really is acting in the best interests of the EU. Thus in conclusion the Commission has much less power then its detractors often suggest, it is not a decision-making body, and its powers are being reduced as those of the other EU institutions grow. The European Parliament was at one time the main cause for concern over democratic deficit in the EU, however changes to the treaties have resulted in those powers growing significantly in recent years. The EP is the only directly elected institution in the EU system but had relatively few powers over how law and policy is made. ...read more.

The EP also has powers over the budget, where it holds joint powers with the Council of Ministers to fix the EU budget. It can ask for changes to the budget, ask for new appropriations for areas not covered and can even with a 2/3rds majority, reject the budget. Finally the EP also has powers over other institutions and thus is the main area where the deficit has really been reduced. The EP can take the Council or the Commission to the European Court of Justice over alleged infringements of the treaties, and to approve the appointment of the president and commissioners. It can, by a 2/3rds majority, pose a very disruptive threat to the Commission, by having the ability to sack the entire college of commissioners through a vote of censure. Therefore in recent times it has become less of a body that merely reacts to the Commission proposals and Council votes, and has increasingly launched its own initiatives and forced the other institutions to pay more attention to its opinions. The EP has won a greater right to amend laws and check the activities of the other institutions, and it has acted as the conscience of the EU and as the guardian of its democratic ideals. Thus it has a critical role in building bridges between EU citizens and EU institutions, and is one of the main reasons why democratic deficit has been reduced in recent times. Adam Sivner ...read more.