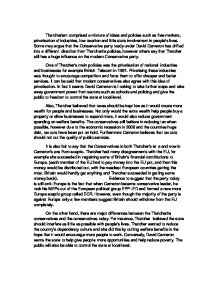 To what extent does the Conservative party still follow Thatcherite principals?

Thatcherism comprised a mixture of ideas and policies such as free markets, privatisation of industries, low taxation and little state involvement in people's lives. Some may argue that the Conservative party toady under David Cameron has drifted into a different direction from Thatcherite policies, however others say that Thatcher still has a huge influence on the modern Conservative party. One of Thatcher's main policies was the privatisation of national industries and businesses for example British Telecom in 1981. Privatising these industries was thought to encourage competition and force them to offer cheaper and better services. It can be said that modern conservatives also agree with this idea of privatisation. In fact it seems David Cameron is looking to take further steps and take away government power from sectors such as schools and policing and give the public to freedom to control the state at local level. ...read more.

Furthermore Cameron believes that tax cuts should not cut the quality of public services. It is also fair to say that the Conservatives in both Thatcher's era and now in Cameron's are Euro-sceptic. Thatcher had many disagreements with the EU, for example she succeeded in regaining some of Britain's financial contributions to Europe. (each member of the EU had to pay money into the EU pot, and then this money would be distributed out, with the neediest European countries getting the most. Britain would hardly get anything and Thatcher succeeded in getting some money back). Evidence to suggest that the party today is still anti- Europe is the fact that when Cameron became conservative leader, he took his MEPs out of the European political group EPP-ED and formed a new more Europe sceptic group called ECR. ...read more.

Conversely, David Cameron wants the state to help give people more opportunities and help reduce poverty. The public will also be able to control the state at local level. To conclude, it is clear that Conservatives are still influenced by Thatcherism. The same principles of privatisation, low taxation and euro-scepticism still form a base in conservative party policies today. However the party today is less radical than it was during the Thatcher years. For example Thatcher believed in free deregulated markets and low taxation, on the other hand, today the party believe that after the economic crisis, markets need some regulation and lowering taxes are not always possible. Also the more active role played by the state shows that the conservative party has moved from the right to a more central position in British politics. ?? ?? ?? ?? ...read more.

3 Stars - This essay has many strong points. It is well structured and argued and is evaluative and analytical - there is a clear understanding of the main issues demonstrated here.
Although many of the points here are valid in themselves, there is a lack of detail that weakens some of the argument. I also think that there could be an exploration of the idea that Thatcherism is effectively the new consensus in British politics, and that the comparison could have been extended to New Labour too!