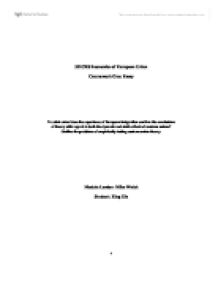 To what extent does the experience of European integration confirm the conclusions of theory with regard to both the dynamic and static effects of customs unions? Outline the problems of empirically testing customs union theory.

332CBS Economics of European Union Coursework One: Essay To what extent does the experience of European integration confirm the conclusions of theory with regard to both the dynamic and static effects of customs unions? Outline the problems of empirically testing customs union theory. Module Leader: Mike Walsh Student: Xing Xin By signing of the Treaty Rome under the name of European Economic Community in 1957, the European Community (EC) was established as a customs union. It abolished all tariffs and quotas between member countries, and imposed a common external tariff on outside imports. By the end of 1992, the Single European Market has been finally established, it removed other non-tariff barriers .since then commodities, capital and labour are able to move freely between member countries. In 1973 the EC also formed a free trade area (FTA) in manufactures with the remaining members of the European Free Trade Area (EFTA). The FTA removed all barriers to trade in manufactures between member countries. However members of the EFTA retained their own tariff level on imports from countries outside of the EC and EFTA. An FTA agreement was established to control and limit free trade status to member countries' products, in order to avoid imports with lowest external tariff coming through member countries within an FTA. With the experience of European integration, it is crucial to discuss and study the topic free trade based on customs union and FTA. In this essay we will be focusing on both dynamic and static effects of customs union which is closely related with European integration; also some problems of the customs union theory will be outlined with empirical evidences. ...read more.

The result is an increase in trade among member countries in the good or service of each nation's comparative advantage. Trade diversion occurs when a country applies the same tariff to all countries, it will always import from the most efficient producer, since the more efficient country will provide the goods at a lower price. With the establishment of a free trade agreement, that may not be the case. If the agreement is signed with a less-efficient country, it may well be that their products become cheaper in the importing market than those from the more-efficient country, since there are taxes for only one of them. Consequently, after the establishment of the agreement, the importing country would acquire products from a higher-cost producer, instead of the low-cost producer from which it was importing until then. The numerical example underlying can be used to illustrate how customs union is generally working. As we can see price for home, partner and rest of world (RoW) are assumed respectively: 50, 40, and 30. The case one is focusing on trade creation process. Suppose tariff is 30, before formation of the customs union, 50 is optimal price because after tariff, products from partner and RoW are not competitive anymore. However diverting situation would be showed up if a customs union is formed. Now the price of partner's products is even lower than domestic production. Shall we take a look another case of trade diversion. The process is the same, firstly we set a tariff=15, and then we pick up the respective optimal prices (red circled) ...read more.

Secondly the establishment of a customs union may be widening the economic gap between different regions in member countries. If a customs union is formed, the regional capital will flow gradually to a better investment environment. Without the effective policies, the gap between backward and advanced area will be distinctly. Is customs union theory perfect? Is there any problem of customs union? The answer is obvious. The major problem of customs union is implementation. One example here is helpful to understand. A cargo that is unloaded at Marseilles or Rotterdam must pay duties there, but will not face any additional charges if it then goes by truck to Munich. To make this simple system work, however, the countries must agree on tariff rates: the duty must be the same whether the cargo is unloaded at Marseilles, Rotterdam, or, for that matter, Hamburg, because otherwise importers would choose the point of entry that minimized their fees. So a customs union requires that Germany, France, Netherlands, and all the other countries agree to charge the same tariffs. This can not be done easily. In conclusion although the economic integration based on customs union is hard to implement and achieve. However , with the belief that economic unity would help cement the postwar political alliance between European democracies, the EU has become a supranational and intergovernmental union of 27 democratic member states, with a GDP of 13,400,000 million USD (2005). EU member states have agreed a programme called the Lisbon Strategy which aims at making "the EU the world's most dynamic and competitive economy" by 2010. ...read more.