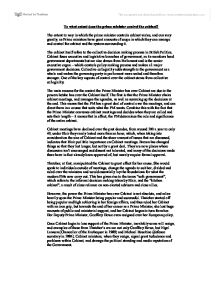 To what extent does the prime minister control the cabinet?

To what extent does the prime minister control the cabinet? The extent to way in which the prime minister controls cabinet varies, and can vary greatly, as Prime ministers have great amounts of scope in which they can manage and control the cabinet and the system surrounding it. The cabinet itself refers to the collective decision making process in British Politics. Cabinet fuses executive and legislative branches of government, as its members head government departments but are also drawn from Parliament and is the senior executive organ - which controls policy-making process and makes all major government decisions. Collective collegiality adds strength to the government as a whole and makes the governing party in parliament more united and therefore stronger. One of the key aspects of control over the cabinet stems from collective collegiality. The main reasons for the control the Prime Minister has over Cabinet are due to the powers he/she has over the Cabinet itself. ...read more.

They are now places where discussion isn't encouraged and dissent not tolerated, and many of the decisions made there have in fact already been approved of, but merely require formal approval. Thatcher, at first, manipulated the Cabinet to great effect for her cause. She would speak to individuals outside of meetings, change the agenda to suit her, divided and ruled over the ministers and would essentially lay the foundations for what the modern PMs now carry out. This has given rise to the terms "sofa government", which refers to the informal decision making taken by Blair, and the "kitchen cabinet", a result of close reliance on non-elected advisors and close allies. However, the power the Prime Minister has over Cabinet is not absolute, and relies heavily upon the Prime Minister being popular and successful. Thatcher started off being popular and high achieving in her foreign affairs, and thus ruled her Cabinet with an iron grip, but towards the end of her career as a Prime Minister, she lost huge amounts of public and ministerial support, and her Cabinet began to turn from her. ...read more.

Blair's Third Way. Added to this is the growth of populist outreach, where PMs speak on behalf of the population, claiming to feel their deepest fears and trying to comfort them. Independent institutions such as the PM's Office have expanded massively in recent years, meaning that the PM has even greater control over government and its running, as it helps to join up the executive at its highest level in an administrative fashion, which the PM can modify to suit his or her purpose. In conclusion, the Prime Minister has a great deal of control and power over the Cabinet, but while it isn't complete, the control he or she has over them is far more reliable than the control the PM will have over all the party MPs - as the ministers picked to be in Cabinet will be trusted and loyal to the current Prime Minister. Any revolts coming from the party will normally be first seen among the backbenchers, and not the Cabinet themselves. ...read more.

4 Stars - An effective essay overall. Clearly and logically expressed and organised - with a well developed argument that considers and weighs a range of points. The essay could be improved through use of more detailed supporting examples and by consistently addressing the question throughout.