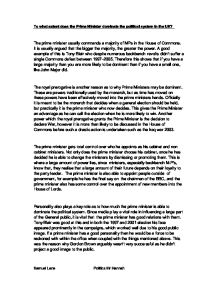 To what extent does the Prime Minister dominate the political system in the UK?

To what extent does the Prime Minister dominate the political system in the UK? The prime minister usually commands a majority of MPs in the House of Commons. It is usually argued that the bigger the majority, the greater the power. A good example of this is Tony Blair who despite numerous backbench revolts didn't suffer a single Commons defeat between 1997-2005. Therefore this shows that if you have a large majority than you are more likely to be dominant than if you have a small one, like John Major did. The royal prerogative is another reason as to why Prime Ministers may be dominant. These are powers traditionally used by the monarch, but as time has moved on these powers have been effectively moved into the prime ministers hands. Officially it is meant to be the monarch that decides when a general election should be held, but practically it is the prime minister who now decides. ...read more.

Personality also plays a key role as to how much the prime minister is able to dominate the political system. Since media play a vital role in influencing a large part of the General public, it is vital that the prime minister has good relations with them. Tony Blair was good at this and in both the 1997 and 2001 election his face appeared prominently in the campaigns, which worked well due to his good public image. If a prime minister has a good personality then he would be a force to be reckoned with within the office when coupled with the things mentioned above. This was the reason why Gordon Brown arguably wasn't very successful as he didn't project a good image to the public. However there are constraints that don't allow the prime minister to dominate entirely. These would involve factors that allow appointments to be affected. ...read more.

This was certainly the case in John Majors reign where he ruled with a small majority. Another constraint is that the loyalty of the party cannot always be relied upon. Thatcher led a divided party in 1990, and eventually the cabinet forced her out during a leadership contest. More recently Tony Blair faced hostility from within his own party, particularly after the Iraq War. His final few months within government were characterised by a backbench dissent, which is both a good example of loyalty being betrayed and the power of the backbench MPs when they come together. In concluding, I believe that whilst the Prime Minister is a very dominant force with the political system, but there are constraints that stop him being completely dominant. The best example of this is Tony Blair, who despite winning three general elections for his party and having a decent majority in the 2005 election, he was still pushed out by backbench MPs. By Samuel Lane. ?? ?? ?? ?? Samuel Lane Politics Mr Hannah ...read more.