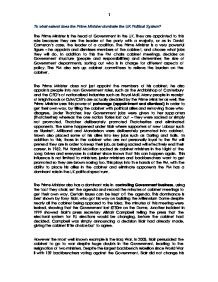 To what extent does the prime minister dominate the UK political system?

To what extend does the Prime Minister dominate the UK Political System? The Prime Minister is the head of Government in the UK. They are appointed to this role because they are the leader of the party with a majority, or as in David Cameron's case, the leader of a coalition. The Prime Minister is a very powerful figure - he appoints and dismisses members of the cabinet, and choose what jobs they will do. In addition to this the PM chairs cabinet meetings, decides on Government structure (people and responsibilities) and determines the size of Government departments, sorting out who is in charge for different aspects of policy. The PM also sets up cabinet committees to relieve the burden on the cabinet. The Prime Minister does not just appoint the members of his cabinet, he also appoints people into non Government roles, such as the Archbishop of Canterbury and the CEO's of nationalised industries such as Royal Mail. Many people in receipt of knighthoods or O/M/CBE's are actually decided by the Prime Minister as well. The Prime Minister uses this power of patronage (appointment and dismissal) in order to get their own way, by filling the cabinet with political allies and removing those who disagree. Under Thatcher, key Government jobs were given to her supporters (Thatcherites) whereas the one nation Tories lost out - they were sacked or simply not promoted. Thatcher deliberately promoted Thatcherites and eliminated opponents. The same happened under Blair where supporters of new Labour such as Blunkett, Miliband and Mandelson were deliberately promoted into cabinet. ...read more.

They also assist with writing his speeches and will offer policy advice. The Policy Unit is rather self explanatory, it develops policy. Blair often questioned ministers based on briefings from this unit, which he referred to as ''the Downing Street dozen''. Finally, the Press Office looks after the PM's links with the media. This is an important role; Alistair Campbell (Blair's Press Secretary) was voted 8th most powerful man in Britain - ahead of all the cabinet, but still behind Blair. A British PM can claim a personal mandate as everyone knows who he is, but his cabinet members are not as well known. In the run up to the 1997 election, half the stories were not about the Labour party, but about Tony Blair. The TV debates introduced in 2010 also focused on the person, not the party. As well as making the PM more Presidential, they are also increasing his power. Ministers are very reluctant to criticise the PM and people are voting for the person, not the party. Arguably, the PM is better off without a department as the Prime Minister's Office is a department in all but name, according to former top Civil Servant Kemp. As the PM is not bogged down in departmental matters like his cabinet colleagues, his workload is more manageable. The Prime Ministers Office is another instance where the PM exerts his power. The Prime Minister is also in a strong position because he has been elected party leader. ...read more.

The Prime Minister also knows that it is difficult to replace a minister. His cabinet also know this, it is a major strength for these ministers who know that they cannot be sacked easily even if their behaviour is unreasonable. The PM is very constrained in the fact their ministers must be chosen from Parliament. The pool of selection is reduced further when the MP's who are too young, too old and who do not want the job are taken into account. Some more MP's may not be competent enough for the position, or have a colourful past, this rules out even more. So suddenly the PM has to find 80 jobs from around 200 MP's, this is more than one in three. A prospective minister must also be a skilled debater, a people person, a trustworthy and confident individual and the stamina for a demanding job. Not every MP fits this bill. This reduces the power of the PM as he may be forced to keep an individual in Government as there is nobody suitable to replace him. Despite the Prime Minister being forced into keeping political heavyweights in his cabinet, and the sheer difficulty of replacing a minister, he retains a great deal of authority and dominates the political system in the UK. By using the power of patronage, controlling of Government business and cabinet committees along with the vast quantity of backup available to him from advisors and the Prime Ministers Office, the Prime Minister is a very powerful figure in UK politics. ?? ?? ?? ?? 1 ...read more.