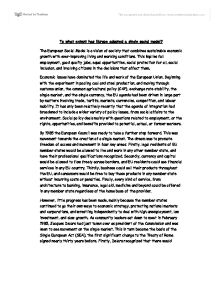 The European Social Model is a vision of society that combines sustainable economic growth with ever-improving living and working conditions. This implies full employment, good quality jobs, equal opportunities, social protection for all, social inclusion, and involving citizens in the decisions that affect them.

Economic issues have dominated the life and work of the European Union. Beginning with the experiment in pooling coal and steel production, and moving through customs union, the common agricultural policy (CAP), exchange rate stability, the single market, and the single currency, the EU agenda had been driven in large part by matters involving trade, tariffs, markets, currencies, competition, and labour mobility. It has only been relatively recently that the agenda of integration had broadened to include a wider variety of policy issues, from social affairs to the environment. Social policy deals mainly with questions related to employment, or the rights, opportunities, and benefits provided to potential, actual, or former workers.

By 1985 the European Council was ready to take a further step forward. This was movement towards the creation of a single market. The dream was to promote freedom of access and movement in four key areas; Firstly, legal residents of EU member states would be allowed to live and work in any other member state, and have their professional qualifications recognized. Secondly, currency and capital would be allowed to flow freely across borders, and EU residents could use financial services in any EU country. Thirdly, business could sell their products throughout the EU, and consumers would be free to buy those products in any member state without incurring costs or penalties. Finally, every kind of service, from architecture to banking, insurance, legal aid, medicine and beyond could be offered in any member state regardless of the home base of the provider.

However, little progress has been made, mainly because the member states continued to go their own ways to economic strategy, protecting national markets and corporations, and wrestling independently to deal with high unemployment, low investment, and slow growth. As community leaders sat down to meet in February 1985, Jacques Delors had just taken over as president of the Commission and was keen to see movement on the single market. This in turn became the basis of the Single European Act (SEA), the first significant change to the Treaty of Rome signed nearly thirty years before. Firstly, Delors recognized that there would eventually have to be a monetary union if Europe were to move toward a genuinely single market. His idea was a four part plan. Firstly, prospective members of a single currency system would be required to adhere strictly to the exchange rate mechanism (ERM) which already existed. Secondly, the economies of member states would have to converge. Convergence meant the key economic variable such as inflation; interest rates, government borrowing and unemployment would have to become similar in all the member states. This would reduce the potentially disruptive effects of adopting a single currency. Thirdly, here would be an interim phase during which the currencies would be absolutely fixed against one another and interest rates would be set for all members of the European Central Bank. Finally, there would be a rapid changeover to the single currency by all member countries at the same time.

Delors wanted to see progress towards closer political union. It was the intention which infuriated Margaret Thatcher. During the negotiations for the Single European Act she had accepted what was seen as an inevitable development. After SEA, however, Delors wanted to see further progress as quickly as possible. He was finally successful at Maastricht in 1992.

Maastricht treaty ad a number of facets, making it not only one the biggest steps forward, but also one of the most extensive. Its main provisions were as follows; the future political development of the union was to be based on the principle of subsidiarity. The SEA was incorporated into the Treaty of Rome; in effect this gave the European Union a ‘constitution’ for the first time. Also, there was a final commitment to move towards a single European currency, the year 2002 was agreed as the target date. Three countries, including the UK were allowed to opt out of the aspect of the Treaty. Moreover, it was agreed that there would be movement towards the idea of ‘European citizenship’. This implied completely free movement of people between member countries, a process which had already begun as a result of the Schengen Agreement of 1985. Finally, the social chapter was negotiated. This established a wide range of rights fro workers such as working hour directive to prevent excessively long hours of work and short holidays, rights fro women workers, equal treatment fro part-time workers and safeguards against unjustified job losses. As with the single currency issue, Britain opted out from the Social Chapter. In the event, the Labour party made a commitment to sign the social chapter and did so as one of it first acts when it won power in 1997.

Maastricht proved to be Delors greatest achievement; however, there are failures and successes with in this. The most successful was that at least twelve of the members did commit themselves to closer union. All signatories to the single currency accepted that they would have to accept economic disciplines in order to maintain stability under the convergence criteria. Also, the Social chapter represented a major step forward for the rights of workers and for establishing a genuinely open market throughout the continent. Finally, the single currency issue was resolved. On the other hand, the main failures were that Schengen had begun the process of establishing free movement but Maastricht failed to persuade all members, notably the UK, that they should abandon border restrictions. Also, clearly the fact that the UK remained determined to opt out of key elements, mainly the single currency and social chapter, can be seen as a failure to persuade John Major to stand up to the rebels in his own party. Overall, we can see that Maastricht enjoyed limited success. It is likely that the movement towards a single currency will prove in the future to have been its principle achievement.

In conclusion, although the work of the EU has been driven most obviously by economic factors, and particularly by the goal of free trade in a single market, European leaders have found that economic integration has had spillover effect on many other policy areas. Most notably, they have found that completion of the single market was a more complex notion than originally expected. Whatever happens over the next few years, the single market has had widespread and irreversible implications for everyone living in the EU, and for all the EU’s trading partners.