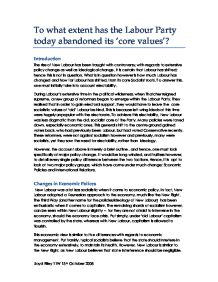 To what extent has the Labour Party today abandoned its core values?

To what extent has the Labour Party today abandoned its 'core values'? Introduction The rise of New Labour has been fraught with controversy, with regards to extensive policy change as well as ideological change. It is certain that Labour has shifted; hence this is not in question. What is in question however is how much Labour has changed and how far Labour has shifted, from its core Socialist roots. To answer this, one must initially take into account electability. During Labour's extensive time in the political wilderness, when Thatcher reigned supreme, a new group of reformers began to emerge within the Labour Party. They realised that in order to gain electoral support, they would have to leave the core socialistic values of 'old' Labour behind. This is because left-wing ideals at this time were hugely unpopular with the electorate. To achieve this electability, New Labour was less dogmatic than the old, socialist core of the Party. ...read more.

However, New Labour - in contrast to the New Right - does condone public sector borrowing - if used to improve public services. Apart from direct economic policy, New Labour's view on trade unions is also much changed from those of 'old Labour'. In typical socialist fashion, 'old Labour' supported trade unions, and allowed them almost infinite power. However, New Labour, much like Thatcherism, believes that the role of trade unions should be minimised. New Labour, unlike Thatcherism however, believes that there is a place for trade unions.Hence, New Labour has taken the middle ground - to the left of the New Right and to the right of Socialist policy. Changes in International Relations Traditional, 'old' Labour ideology has always been suspicious of the wider world. Therefore, their policies reflect this. With regards to foreign affairs, 'old' Labour supported British isolationism from international affairs. Of course, this won Britain few allies in the international arena. ...read more.

hence linking pro-Internationalist economic policies with enthusiasm for world organisations, New Labour have played a major part in Britain's involvement on the international stage. Conclusion Ultimately, New Labour has shed socialist ideology, in order to do better at the polls. Therefore, citing the differences above, one can easily see that New Labour is no longer socialist. One can say with concrete evidence, then, that New Labour has abandoned, its 'core' values, i.e. socialism almost fully. The shift from socialism to New Labour within the Labour Party is almost akin to the contemporary shift within the Conservative Party: the shift from the New Right to the Social Conservatives. Quite simply, New Labour has left their 'core' values far behind, yet it would be wrong to suggest that the Labour Party is no longer a socialist party - for there are still many socialists within the Party. It is merely the whim of the leaders which have changed - albeit dramatically. ?? ?? ?? ?? Lloyd Riley 11W 15th October 2008 ...read more.

3 Stars - The essay is well structured, has a clear, coherent line of argument and is generally articulately expressed - in essence the question was addressed.
The essay could be improved by considering a wider range of issues - Clause 4 was not mentioned, industrial relations were not considered in sufficient depth (trade union links to the Labour Party), nor New Labour's attitude to the welfare state. The argument was somewhat one sided and in places the language used displayed a degree of prejudice towards 'old Labour.'