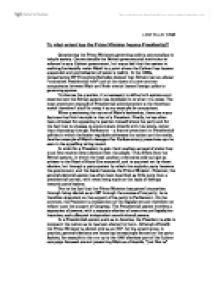 To what extent has the Prime Minister become Presidential?

Livvy Ollin 12b2 To what extent has the Prime Minister become Presidential? Questioning the Prime Ministers governing style is commonplace in today's society. Conventionally the British governmental institution is referred to as a Cabinet government, but many feel that the system is evolving (noticeably under Blair) to a point where the Cabinet has become suspended and centralisation of power a reality. In the 1960s, Conservative MP Humphrey Berkeley claimed that Britain had an almost "unchecked Presidential rule"; and at the dawn of a new century comparisons between Blair and Bush stretch beyond foreign policy to governing system. To discuss the question, it is necessary to define both systems and examine how the British system has developed in to what it is today. The most prominent example of Presidential administration is the American model therefore I shall be using it as my example for comparison. When questioning the nature of Blair's leadership, there are many features that link his style to that of a President. Firstly, he has often been criticised for appearing to position himself above the party and for the fact that he chooses to communicate directly with his voters, rather than discussing through Parliament - a feature prominent in Presidential politics in which the leader regularly addresses the nation and the media. ...read more.

Strong party unity is vital to the Prime Minister as it means he will usually have sufficient support to get policies through parliament. Whereas the President's control of the legislature is not so strong, the Prime Minister can use his leadership of the majority party to control parliament. The British executive is collegial, taking the form of a Cabinet or council of ministers in which the Prime Minister was traditionally just 'first among equals. In choosing the members of his cabinet, the Prime Minister is more limited than his Presidential counterpart in that the Cabinet Ministers should be Members of Parliament. He has no power over the bureaucracy as it is permanent and he does not have the support of a personal department as the President does in the White House Office. The Prime Minister is able to appoint the members of his Cabinet, one of the few powers of patronage he has. When a President first enters office he appoints approximately 4,000 officials. This is the 'spoils system' that gives the President considerable power to reward, bribe and demand. In this respect, the Prime Ministers power is more limited than the Presidents as he does not have the abundance of positions to reward with. However, he can control his Cabinet through his ability to fire and hire. ...read more.

The monarch only ever exercises any important prerogative powers with the advice of the head of government. There is one area in which the Prime Minister is in fact constitutionally stronger than the President. Whereas in America executive and legislative powers are permanently separated, in Britain the executive dominates the legislature. This leaves the Prime Minister with far tighter control over Westminster than the President has over Congress. In conclusion, the Prime Minister may sometimes appear to be distancing himself from Parliament but unlike the President he is constantly answerable and remains accountable to Cabinet. On the other hand, many powers of our Prime Minister are less restrained than those of a President such as patronage, the support of a strong party system and the ability to exercise a large number of prerogative powers. These powers are largely flexible due to the lack of a legal framework defining the office (influenced by the fact Britain has no codified constitution). The Prime Minister has certainly appeared to become increasingly presidential and we are moving away from Cabinet government and toward Prime Ministerial government; however I disagree that it is conforming to the American model. Blair is continuing a recent trend of particularly dominant Prime Ministers, for example Wilson and Thatcher. By taking full advantage of Labour's huge parliamentary majority and continued popularity, he appears to be pushing the Office to its limits, further enhancing the control of the Prime Minister over policy making. ...read more.