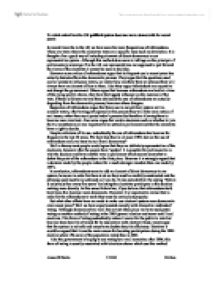 To what extent has the UK political system become more democratic in recent years In recent times the in the UK we have seen the more frequent use of referendums. These are votes where the electorate votes on a specific issue such as devolution. It is thought of as a good way of including elements of direct democracy in our representative system. Although this method does seem to infringe on the principal of parliamentary sovereign if in the UK our representatives our supposed to put forward the views of the electorate it cannot be seen as bad idea. However some critics of referendums argue that its frequent use in recent years has actually detracted from the democratic process. They argue that the questions used can be worded to influence voters, no matter how carefully they are phrased they will always have an element of bias to them. ...read more.

Well in theory most people would agree that they are definitely representative of the electorate, however after the people have 'spoken' it is possible for parliament to re-visit the decision and have another vote in parliament which seems somewhat to defeat the point of the referendum in the first place. However it is strongly argued that a decision made by the people makes for a much stronger mandate than one made by MP's. In conclusion, referendums seem to add an element of direct democracy in our system, however in order for them to do so they must be carefully constructed and the phrasing used must be as unbiased as it can be. It also puts death to the saying 'Britain is only truly free every five years' by letting the electorate participate in the decision making more directly. In this sense Britain has, if you believe that referendums held have been fair, become more democratic. ...read more.

So finally, how far has the UK come to making its system more democratic in recent years? Well its use of referendums if used in the right way certainly is a way that the UK has used to try and re-connect voters and improved voter turnout using postal voting despite some widespread concerns about its reliability. Some measures have still not yet been introduced to make it easier for the electorate to cast their vote, in this context until these measures have been introduced and are completely secure it is difficult to say we are doing everything we can to make ourselves as democratic as possible. However new voting techniques and innovations in how we vote in recent years have been promising and as these types of vote casting systems mastered it can only contribute to our democratic status. ?? ?? ?? ?? James Wilhelm 12 DH Politics ...read more.

2 Stars - The scope of this answer is somewhat limited - most of it appeared to be an essay about referendums. This essay should have considered a wider range of issues - what about devolution and directly elected mayors for example? Also, there was little use of concrete examples - why talk generally about referendums when you could give direct examples of the real results of them?