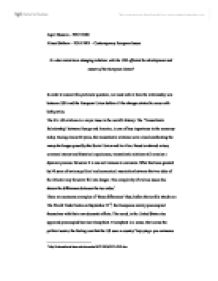 To what extent have changing relations with the USA affected the development and nature of the European Union?

Aqeel Hussain - P03171280 Alison Statham - POLI 1003 - Contemporary European Issues To what extent have changing relations with the USA affected the development and nature of the European Union? In order to answer this particular question, we must look at how the relationship was between USA and the European Union before all the changes started to occur with both parties. The EU-US relations is a major issue in the world's history. The 'Transatlantic Relationship' between Europe and America, is one of key importance to the economy today. During almost 40 years, the transatlantic relations were aimed confronting the many challenges posed by the Soviet Union and its allies. Based on shared values, common interest and historical experiences, transatlantic relations still remains a dynamic process. However it is one not immune to corrosion. What has been granted by 50 years of serious political and economical association between the two sides of the Atlantic may however fall into danger. The complexity of various issues has shown the differences between the two sides.1 There are numerous examples of 'these differences' thus, before the terrible attacks on The World Trade Centre on September 11th, the Europeans mainly preoccupied themselves with their own domestic affairs. The mood, in the United States also appeared preoccupied but also triumphant. ...read more.

However, the nature of developing the EU also has its foreseen problems. With enlargement comes the need for further reform, questions such as the appropriate level of governance for different issues in Europe - or who does what inside the EU.4 Even though the terrorist attacks and the war scenes are over, the need for transatlantic relations remain as necessary as it was before the tragic events. A different situation has started on the world scene. A situation where matters of concerns have now largely drifted from hard security issues towards public issues. Military balance no longer dominates world peace. Environmental issues, long-term effects of biotechnologies, the impact of genetically modified organisms on nature and human beings. Public issues such as organised crime with globalise networks of corruption, and, last, the impact of globalisation on democracy and the national state are all issues that now give rise to states on the international stage.5 In a sense, the recent change in the development and running of the EU has come about due to the tragic events occurred on the world stage which has been affected the world, in particular the US. The impact of the US has caused the need for change in various ways. These changes undoubtedly have caused changes in the 'Transatlantic Relationship' with the EU. ...read more.

The US-EU have been very good to each other in terms of cooperation. Despite differences relating to the war on Iraq, anyone observing the US-EU relationship would be struck by the close cooperation they have had on counter-terrorism efforts, non-proliferation and various regional issues.6 In the summer, the US and EU had a good summit in Washington, where they adopted concrete measures to increase our cooperation on non-proliferation, energy, and counter-terrorism.7 In conclusion to this question, what the US has done by changing its relation with the EU to affect the nature and development of the EU is very small compared to what the EU has done on its own to make it a stronger Europe and a stronger partner to the US. As said earlier, what developments the EU has done has changed its relation with the US (e.g. enlargement). However, there has been times where the actions of the US has indirectly affected the European Union (e.g. war on Iraq). Therefore to say that the relationship with the US caused changes in the EU would be unfair to those who work tirelessly in the EU to make it the EU it is today. But it can be said to a small extent that the changing relationship with the US has affected the development and nature of the European Union, otherwise it would be unfair to the US. ...read more.