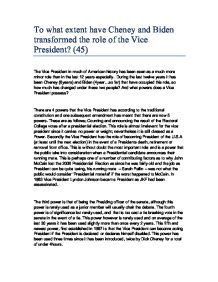 To what extent have Cheney and Biden transformed the role of the Vice President?

To what extent have Cheney and Biden transformed the role of the Vice President? (45) The Vice President in much of American history has been seen as a much more minor role than in the last 12 years especially. During the last twelve years it has been Cheney (8years) and Biden (4year...so far) that have occupied this role, so how much has changed under these two people? And what powers does a Vice President possess? There are 4 powers that the Vice President has according to the traditional constitution and one subsequent amendment has meant that there are now 5 powers. These are as follows; Counting and announcing the result of the Electoral College votes after a presidential election. This role is almost irrelevant for the vice president since it carries no power or weight; nevertheless it is still classed as a Power. ...read more.

The third power is that of being the Presiding officer of the senate, although this power is rarely used as a junior member will usually chair the debate. The fourth power is of significance but rarely used, and that is too cast a tie breaking vote in the senate in the event of a tie. This power however is rarely used and on average of the last 30 years it has been used slightly more than once every 2 years. This fifth and newest power, first established in 1967 is that the Vice President can become acting President if the President is declared or declares himself disabled. This power has been used three times since it has been introduced, twice by Dick Cheney for a total of under 4hours. ...read more.

Another key role that Cheney played was in the legislature whereby he liaised with Congress in order to pass through any legislation the Executive desired. However it could be argued that Joe Biden with his 36years of experience in the senate would have much more influence. This was proved over Obama's health care reform whereby Presidents such as Reagan had previously tried and failed to pass this reform. Although Obama's reform was watered down it was still a remarkable achievement and Biden obviously had a lot to do with this. In conclusion, Cheney expanded the role of the VP to something that is more prestigious and more involved in everyday affairs. Biden since his reign has refused to expand the role further and while he has not decreased the office; he has worked more in the background than his predecessor mainly due to the situations that arouse under Cheney and Bush. ?? ?? ?? ?? ...read more.