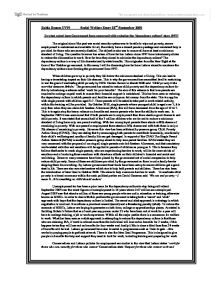 To what extent have Government been concerned with reducing the dependency culture since 1997?

To what extent have Government been concerned with reducing the 'dependency culture' since 1997? The original aim of the post war social security system was to be able to wipe out poverty, ensure employment is maintained and available for all, the elderly have a decent pension package and consistent help is provided for those who are severely disabled. The objective aim was to ensure all have at least a minimum standard of living. The question however has arisen of how far has Labour since 1997 have introduced policies to reduce the disincentive to work. How far have they aimed to minimise the dependency culture? The dependency culture is a way of life characterised by state benefits. This originates from the New Right at the time of the Thatcher government. In this essay I will be discussing how far have Labour aimed to condense the dependency culture since forming the government from 1997. When children grow up in poverty they fall below the minimum standard of living. This can lead to having a devastating impact on their life chances. This is why the government has committed itself to enshrining in law the goal of eradicating child poverty by 2020. ...read more.

this happens twice they will lose out on benefits for four weeks and finally if this is done a third time then 24 weeks of benefits will be lost. Labour government have also invested in programmes such as Train to gain - this works by paying people to get back at work. There is also the New Deal Programme. This is designed to give people on benefits the help and support they need to look for work, including training and preparing for work. Conservatives and Labour policies for employment are similar in the view that Labour states 'work for those who can, security for those who cannot' Conservatives state 'Respect for those who cannot work and Employment for those who can'. However those who are capable of work will be expected to do work or to prepare for work. They will provide a comprehensive programme of support for jobseekers. There will be ongoing and rapid assessments for new and existing claimants for out of work benefits. A similar stance which recent polls showed that 76.7% of the public agreed with was that those who refuse to join a return to work programme will lose the right to claim unemployment benefits. ...read more.

Pressure Groups such as Age Concern and Help the Elderly are in agreement with this. There was also the mention of the basic state pension increasing by 2.5% at least. This supports the views of The Liberal Democrats, as they believe that the state pension is too low and the current system discriminates against women. They however propose instead of having NI Contributions, there should be a Citizens Pension. To conclude, it can be said that government since 1997 have aimed to reduce their dependency culture, but consideration must be taken at the current economic climate, in which jobs are lost. This can lead to poverty and unemployment hence overall leading to self-reliance on the state. The government have provided incentives to work to help reduce the dependency culture. They also selectively supported those who can't and genuinely need help. So all in all it can be said that they have tried to reduce this culture of dependency but however current benefit system have loopholes in which make it easy for people to live of the state for example JSA but in theory to a high extent the government have tried to reduce the culture, in practise however, this extent is not quite so visible. ?? ?? ?? ?? Rabia Begum UVI9 Social Welfare Essay 22nd September 2009 ...read more.