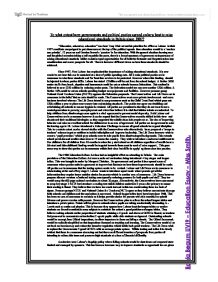 To what extent have governments and political parties agreed on how best to raise educational standards in Britain since 1997?

To what extent have governments and political parties agreed on how best to raise educational standards in Britain since 1997? "Education, education, education" was how Tony Blair set out his priorities for office as Labour in their 1997 manifesto campaigned to put classrooms at the top of the political agenda thus education would be a 'number one priority'. 12 years on and Gordon Brown's 'passion' is for education. With the general election drawing near and the global recession taking a toll on public finances, there is a broad-spectrum of agreement on importance of raising educational standards whilst maintain equal opportunities for all both the fortunate and forgotten taken into consideration and career prospects for all. There is however different views on how these standards should be achieved. Since 1997, New Labour has emphasised the importance of raising educational standards. It is now crucial to see how this can be sustained at a time of public spending cuts. All 3 main political parties are in consensus to raise these standards and for front line services to be protected. However where this funding should be injected is where parties differ. Labour has stated �2 billion will be cut from the school budget. A further 3000 senior staffs from heads, deputies and bureaucrats could be cut as schools become federations. ...read more.

This has been an immense way to improve standards as opportunities are given to deteriorating schools. The milestone of 200 academies is now a year ahead of target with plans to open a further 200. Both the government and opposition agree that failing schools should be academies and aim to tackle under achieving schools so standards can be maintained and improved where possible. This however is a major ideological shift for the Conservatives as they disagreed with academies and were in support for selective education. For academies to be set up they require �25 million from the state and �2 million from private companies. Labour however is abandoning this sponsorship fee for private companies to pay more. This to an extent mirrors the Conservatives who place emphasis on more private involvement and wish for more independence for these academies. They within 100 days of government close failing schools and reopen them as academies. In their 2009 spring conference they planned primary academies and stated that primary schools will receive more freedom from council control and power over curriculum, budget and hours. This conversely has been criticised NUT as they consider this to be financially impossible especially at a time where cuts have to be made. The Lib Dems have not stated much about academies. Academies have faced immense criticism on the notion that little money is paid by companies but they have a vast impact on the curriculum and concerns have arisen regarding paying conditions. ...read more.

The Conservatives however would give a 10% discount on student loan repayments to those who paid ahead of schedule. However NUS believe that with this only those from affluent backgrounds will benefit from this and those from the poorest backgrounds are likely to lose out. More than half of university heads want students to pay at least �5,000 per year or for there to be no upper limit. This has angered the NUS, who want to entirely replace the fee system with repayments linked to later earnings. This shows that there is a consensus to improve higher education standards but again different routes are taken by parties some of which are short term benefits like the conservatives and long term such as Labour and tuition fees. In conclusion it can be said that in theory consensus is apparent as the core aims of education such as maintaining standards, ensuring students are attending university and both choices and opportunities to be available. In practise however, different standpoints are implemented by each party on how these goals should be achieved and how the gap between the fortunate and forgotten should be bridged. The current financial crisis has led to questions about where cuts will fall, what opportunities are available for failing schools, skills based learners and for students intending to enter higher education thus it is here where the consensus detaches. ?? ?? ?? ?? Rabia Begum UVI9 - Education Essay - Miss Smith. 1 ...read more.