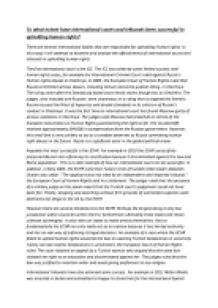 To what extent have international courts and tribunals been successful in upholding human rights?

Finally, stopping and searching without firm grounds of warranted suspicion were deemed to be illegal in the UK by the ECHR. However there are several limitations to the ECHR. Perhaps the largest being it only has jurisdiction within countries within the EU; furthermore ultimately these states still retain ultimate sovereignty. It also relies on states to make arrests themselves. And so fundamentally the ECHR can only really act as an advisor because it has limited authority and has no real way of enforcing its legal decisions. An example of a case where the ECHR failed to uphold human rights would be the ban on wearing Turkish headscarves in university. Turkey can ban Islamic headscarves in universities, the European Court of Human Rights ruled. The court rejected an appeal by a Turkish woman who argued that the state ban violated her right to an education and discriminated against her. The judges ruled that the ban was justified to maintain order and avoid giving preference to any religion. ...read more.