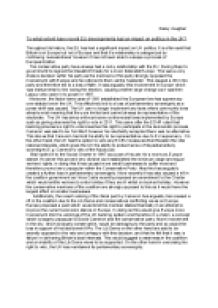 To what extent have recent EU developments had an impact on the UK?

﻿Daisy Vaughan To what extent have recent EU developments had an impact on politics in the UK? Throughout its history, the EU has had a significant impact on UK politics. It is often said that Britain is in Europe but not of Europe and that it?s relationship is categorized by continuing ?awkwardness? however it has not been able to escape a process of Europeanization. The conservative party have always had a rocky relationship with the EU. During Major?s government he signed the Maastricht treaty for a more federalist Europe. This was a very divisive decision within his party as the members of his party strongly opposed the involvement with Europe and he referred to them as the ?bastards?. ...read more.

This came after the ECHR ruled that banning prisoners a right to vote breached his right to participate in the democratic process. Cameron was said to be ?horrified? however he reluctantly accepted there was no alternative. This shows that Cameron had lost his ability to be representative due to EU supremacy. On the other hand, the UK has the option to veto any EC/EU measures that threaten the vital national interests, which gives the UK the ability to protect some of its parliamentary sovereignty E.g. Cameron?s veto of the fiscal pact. Blair opted in to the Social Charter in 1997 as a part of his aim for a more pro-Europe stance. ...read more.

In doing so this would give Europe more involvement into the workings of the UK banking system and therefore in London, a concept which is largely unpopular to David Cameron and the conservative party. More involvement in the city, which is largely conservative, would be damaging to the party and so would the loss in support of his backbench MPs. The Lib Dems on the other hand are said to be secretly opposed to the veto and unhappy with this decision, and that he felt that it was ?a failure? in delivering Britain?s best interests. This would suggest a weakness in the coalition and an inability of the Lib Dems views to be supported. On the other hand in exercising his right to veto, the UK has maintained its parliamentary sovereignty. ...read more.