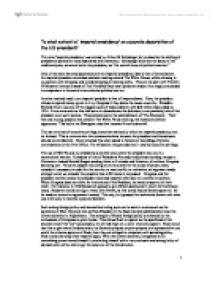 To what extent is &amp;#145; imperial presidency&amp;#146; an accurate description of the US president?

To what extent is ' imperial presidency' an accurate description of the US president? The term 'imperial presidency' was coined by Arthur M Schlesinger Jnr to describe the shifting of presidential powers to those associated with monarchy. Schlesinger said that the decay of the traditional party structure led to the presidency as "the central focus of political emotion." One of the main features associated with the imperial presidency idea is that of centralisation. An imperial president centralises decision making around The White House, whilst refusing to co-operate with Congress and avoids Congress in making policy. This can be seen with Franklin D Roosevelt whose crusade of The Hundred Days was a personal mission that largely succeeded in comparison to his more interventionist policies later on. Another method used by an imperial president is that of impoundment. Here, the president refuses to spend money given to it by Congress if they deem the cause unworthy. President Richard Nixon was one of the biggest users of impoundment with $18 billion impounded by 1974. It is events such as this that serve to demonstrate the defensive, even paranoid, role of the president over such matters. This paranoia led to the establishment of 'The Plumbers'. ...read more.

administration and the current situation in Afghanistan. The strength of Bush's foreign policy is enhanced by the enthusiasm of Congress to grant funds. This allows Bush to appear as the spearhead of the situation and if the 'war' is successful, he will ride high on a wave of public support. Bush could use this to gain more funds as surely the Senate's purpose or part-purpose is a representative one and if the citizens approve of Bush, then they are obliged to cooperate with spending policy. Bush is also showing other imperial signs. With the current situation, he appears to be centralising power round himself by encircling himself with a very exclusive and strong lobby of advisers who will be able to get the most out of the Constitution. President Clinton has been accused of being one of the greatest abusers of executive orders. Paul Begela embraced the following view of Clinton's intention to rise above his prerogatives: "Stroke of the pen. Law of the land. Kinda cool!" Begela's flippant soundbite sums up what many considered an office mired in corruption and Clinton ruling by decree. ...read more.

In the late 1960s and early 1970s, legislators, scholars and commentators condemned an 'imperial presidency', mainly because of foreign ventures undertaken without direct congressional consultation or, in some cases, in secrecy and with alleged deception. During this period, however, Congress maintained power and influence in other fields, such as the environment and various other domestic policies, and forced foreign policy initiatives on a reluctant executive. A relatively short while later, in the 1980-s and 1990s, charges were made against an "Imperial Congress" bent on 'micromanaging' the executive. It is not without a certain sense of irony that the president can be viewed so adamantly as imperial, when the "tyranny of the one" is one of the injustices that the Founding Fathers strove so vehemently to reject. And yet MacGregor Burns mused that the exercise of presidential prerogative powers has "made men great". The fundamental flaw with this issue is that it is impossible to guard against an imperial president such as Richard Nixon or an imperilled present such as Carter or Ford. The factor that determines their status as imperial or otherwise is their personality. This is why it is a fundamentally dangerous situation as the president can push his or her prerogative powers as far as his or her personality allows. ?? ?? ?? ?? 1 1 ...read more.