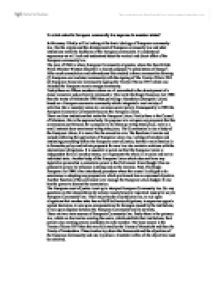 To what extent is European community law supreme in member states?

To what extent is European community law supreme in member states? In this essay I firstly will be looking at the basic ideology of European community law, like the origins and the development of European community law and what institutions make the backbone of the European community. To understand supremacy we will look and understand about the vertical and direct effect of the European community law. The year of 1946 is where European Community originates, where the then British Prime Minister Winston Churchill in Zurich proposed "a united states of Europe". After much consultation and referendums this resulted in three communities forming (1) European coal and steal community with the signing of The Treaty of Paris 1951 (2) European Economic Community signing the Treaty of Rome 1957 which also included the European atomic energy community. Today there are fifteen members whom are all committed to the development of a closer economic and politically community. This led to the Single European Act 1986 then the treaty of Maastricht 1992 thus providing a foundation (European Union) based on a European economic community which integrated a vast variety of activities like a monetary union to a common social policy. Consequently in 1993 the European Economic Community became the European Union. There are four institutions that make the European Union. Firstly there is the Council of Ministers, this is the supreme body. Its purpose is to act upon any proposals that the commission put forward, for a proposal to be taken up voting takes place, only in a small instance does unanimous voting take place. ...read more.

The final source in second legislations is decisions, which are binding in its entirety, it may jus be binding in one state or jus a certain individual e.g. the commission orders a company to stop an anti-competitive practice. One of the criteria's when members join the European Union, was that that European Community law would be superior to any national law. So for example in the United Kingdom, the parliament passed the European Communities Act 1972 to put European Community law in effect. This meant the parliamentary sovereignty was lost. So if any case did arise on a topic of law where there was a conflict between national law and European Community law then European Community would prevail. An example of this would be in the case of R v Secretary of state for transport ex part Factortame 1990, this concerned whether the Merchant Shipping Act 1988 contradicted with the article 7 of the Treaty of Rome 1957. The case went to the European court of justice who held, that national courts can be misapply an act even where it has not yet been proved that community rights have been infringed...." The majority of treaties are agreements between governments; therefore they don't give rights to citizens which are enforceable before their national courts. This is known as direct effect, this ideology was introduced in the case of Van Gend en Loss v Nederlandse Admintstarei de Belastingen 1963 where a private firm bought action against the Dutch excise and customs department, the Dutch courts held ...read more.