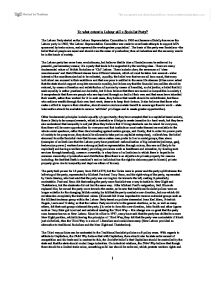 To what extent is Labour still a Socialist Party?

To what extent is Labour still a Socialist Party? The Labour Party started as the Labour Representation Committee in 1900 and became officially known as the Labour party in 1906; 'the Labour Representation Committee was made to coordinate attempts to support MPs sponsored by trade unions, and represent the working-class population'. The basis of the party was Socialism - the belief that all people are equal and should own the mean of production; thus all industries and the economy would be in the hands of society. The Labour party has never been revolutionary, but believes that its idea of Socialism can be achieved by peaceful, parliamentary means; it is a party that tends to be supported by the working class. There are many fundamental values of British Socialism or 'Old' Labour. These include class; the awareness of 'class consciousness' and that different classes have different interests, which all must be taken into account- wider interest of the constituencies had to be reflected, equality; the belief was that we are all born equal, that every individual can succeed in their ambitions and that everyone is entitled to the same life chances (it has never asked that the state should support complete economic equality, but it does say that the financial inequalities should be reduced, by means of taxation and redistribution of income by means of benefits), social justice; a belief that full scale equality is nether practical nor desirable, but it does believe that there are excessive inequalities in society ( it comprehends that there are people who are ...read more.

principles of Third Way; they felt that the party was unelectable if it held just old beliefs, thus the Third Way is a mix of Liberalism and social democracy (New Labour provided an alternative to traditional Socialism and the New Right and Thatcherism). The Third way policies can be contrasted to the Traditional Socialist policies on 8 policy areas. With regards to attitude to Capitalism, the Third Way believe that with Capitalism, there should also be state enforcement of competition and fair trade and in contrast to this, the Socialist belief is that Capitalism should be controlled by the state and that the state should control large industries. On industrial relations, the Third Way believe that though there should be a limited trade union, something solid law should be enforced, which protects workers rights and in a completely different belief, the Socialists believe that trade unions should be very powerful sop that they can protect the workers interests. Welfare state and its services: the Third Way believe that welfare benefits should create incentive but should not be used to redistribute income and on the topic of services, they think that public goods should be provided at a high quality and that the private sector should exist only to improve the efficiency and quality, while on the other hand the Socialist think differently in that they think welfare benefits are needed to redistribute income and that the state should control all welfare services. ...read more.

Kinnock had recognised a need to adjust party and policy to more individualist society: 'Meet the Challenge, Make the Change' and he moved the party towards the centre-left. Smith advanced the process of modernisation of the party - One Member One Vote achieved and Blair, he brought change. The emergence of the 'New Labour' title confirmed a fresh start and a Social democratic transformation. The new Clause 4 of 1995, symbolised transformation - we effectively abandoned centralised planning and public ownership. He recognised that the world had altered and that party must alter too if it was to regain credibility and win elections. The party changed due to four successive defeats, which increased desperation and accelerated the process of modernisation. Democratic socialism had been discredited and was rejected repeatedly at the polls. Labour responded by shifting from democratic Socialism to Social democracy; created a less selfish society without huge increase in government spending. This could all be seen as bringing socialism up to date, as the values haven't changed (social justice, equality of opportunity, community, partnership, rights), its just the policies that acknowledge society has changed. Overall, it feels like the current Labour party has changed many of its policies and has adapted them so that the party can be more electable, which has proven to work, however, I do feel that they basic/core principles of their old Socialist beliefs are still there, so Labour can still be called a Socialist party, but a watered-down version. ?? ?? ?? ?? 1 ...read more.