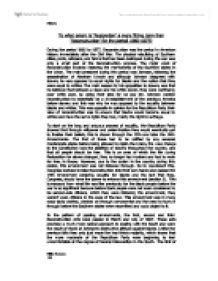 To what extent is 'Restoration' a more fitting term than 'Reconstruction' for the period 1865-1877? During the period 1865 to 1877, Reconstruction was the period in American history immediately after the Civil War. The physical rebuilding of Southern cities, ports, railroads, and farms that had been destroyed during the war was only a small part of the Reconstruction process. The major work of Reconstruction involved restoring the membership of the Southern states in the Union. The main president during this period was Johnson, following the assassination of Abraham Lincoln and although Johnson disagreed with slavery he was opposed to equal rights for blacks and the notion that they were equal to whites. The main reason for his opposition to slavery was that he believed that between a slave and his white owner, they were continuing poor white poor, by doing their jobs for no pay etc. Johnson wanted reconstruction to essentially be a re-establishment of the previous America before slavery and this was why he was opposed to the equality between blacks and whites. This was opposite in opinion for the Republican Party their view of reconstruction was to ensure that blacks would become equal to whites and have the same rights they had, mainly the right to suffrage. ...read more.

This is due to the fact that the moderate Republicans within the party would have been too uneasy about the radical ideas and would never have agreed to the Amendments or Acts. This factor shows how little the Republican Party were able to achieve because anything too dramatic would have never achieved the two thirds majority that was needed for the Amendment to be passed by Congress. By 1871, all the Southern states had devised constitutions, ratified the 14th Amendment and consequently re-entered the Union. However, it remained to be seen whether once the federal military presence had disappeared, the new order would last. For example, Georgia was allowed back into the Union in 1868, but as soon as the federal army officers had left the state, the state legislature expelled all its black members. The white southern attitude to the new reconstructed governments was expressed by a Southern Democrat newspaper; 'These constitutions and governments will last just as long as the bayonets, which ushered them into being shall keep them in existence and not one day longer.' These reconstruction acts were not that effective as shown by the quote that as soon as the federal officers disappeared, life would go back to the way that it was, so although being radical, they were not successful necessarily. ...read more.

They saw their battle as useless and helpless due to the constant undermining that went on. The term Restoration could be seen as a more fitting term than Reconstruction because although efforts were made to change black rights and their equality a certainty, they were never triumphant because the opposition and the supporters of people like Johnson had more powerful positions in power and therefore were able to undermine all they believed. The problems with the differences between the Republicans and the President is one of the most important reasons why the Republican party was unable to achieve much because they turn out to be the weaker party working against the President, the obvious stronger party. Also because Johnson was President he was supported by all the authorities and all of the society's natural leaders, who are easily followed by public, as they are more likely to trust these high members within society. To achieve any drastic variations, the Republican Party had to contest against some of these most leading and important people in the country. This is why the term 'restoration' could be seen as a more fitting term because the Republican Party were unable to achieve much adjustment to the way life was for the black people within the country, because they had very powerful competition who had more ability to control what happened with Reconstruction than they themselves could. ?? ?? ?? ?? History Millie Parsons 13S ...read more.