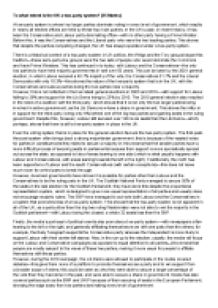 To what extent is the UK a two-party system?

﻿To what extent is the UK a two-party system? [25 Marks] A two-party system is where two larger parties dominate voting in every level of government, which results in nearly all elected offices are held by these two main parties. In the UK?s case, in recent history, it has been the Conservative and Labour party dominating office?with no other party having a Prime Minister. Before this, it was the Conservatives and the Liberal party who were the two leading parties. This shows that despite the parties competing changed, the UK has always operated under a two-party system. There is a historical context of a two-party system in UK politics, the Whigs and the Tory groups began this tradition?these semi-party-like groups were the two sets of people who would dominate the Commons and have Prime Ministers. This has continued in to today, with Labour and the Conservatives?the only two parties to have held majority governments in well over 50 years. ...read more.

Traditionally, the north has been supporters of Labour and the south Conservatives (with certain exceptions)?this does not leave much room for a third party to break through. However, devolved governments have shown it is possible for parties other than Labour and the Conservatives to be the ruling party in the UK. The Scottish National Party managed to secure 50% of the seats in the last election for the Scottish Parliament; they have done this despite the proportional representation system, which is designed to give more equal representation of all parties and usually does not encourage majority rulers. The SNP have managed to out-vote both Labour and the Conservatives in a system that promotes less of a two-party system. This shows that the two-party system is not apparent in all of the UK, as a party other than the big two ruling Westminster were not able to win the majority in the Scottish parliament?with Labour being the closest, a whole 32 seats less than the SNP. ...read more.

It?s presence in the general elections is almost rivalling that of the two large parties in the popular vote?if this was controlled into more specific constituencies, the Lib Dem party would have a reasonable chance in securing a majority government. The evidence, therefore, points toward the idea that the UK is moving away from the two-party system that has been implemented in its traditions. With the rise of support for the Lib Dem party in the general elections; dominance of the SNP in the Scottish Parliament; the media?s coverage of smaller parties; and the BNP and UKIP gaining seats in the European Parliament, it is apparent that more parties are beginning to gain an active role in UK politics. The Lib Dems being a part of the coalition government has the potential to change the system in the UK for the foreseeable future; even if their association with the Conservatives taints their reputation, they have now firmly placed themselves on the map?and it is likely that more people will vote for them in favour of voting for one of the two larger parties in the future. ...read more.