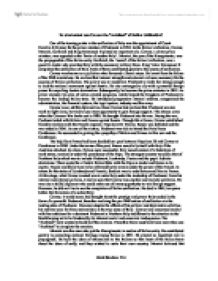 To what extent was Cavour the &quot;architect&quot; of Italian Unification?

To what extent was Cavour the "architect" of Italian Unification? One of the turning points in the unification of Italy was the appointment of Count Camillo di Cavour for the prime minister of Piedmont in 1852. In the Italian Unification, Cavour, Mazzini, Garibaldi and King Emmanuel II played an important role. Cavour, a clever prime minister, was regarded as the 'brain of modern Italy'. Mazzini, the pen of the Risorgimento, was the propagandist of the Italian unity. Garibaldi, the 'sword' of the Italian Unification, was a guerrilla leader who provided Italy with the necessary military force. King Victor Emmanuel II completed the unification of Italy. Each of them contributed greatly to the course of unification. Cavour was known as a politician who favoured a liberal cause. He learnt from the failure of the 1848 revolutions. He realized that internal strength and external aid were necessary for the success of Italian unification. His policy was to modernize Piedmont to make her strong enough to lead the national movement against Austria. He also envisaged to ally with a powerful foreign power for expelling Austria domination. Subsequently, he became the prime minister in 1852. As prime minister, his plan of action created programs, which helped the Kingdom of Piedmont to become the leading Italian state. He introduced progressive internal reforms, reorganized the administration, the financial system, the legal system, industry and the army. ...read more.

Cavour was concerned mainly with his ambitions for a dominant Piedmont in Northern Italy indifferent to the situation in the South hoping not to be hindered by its inherent social and economic inadequacies. The "Architect" only wanted to build half the creation. Therefore there must have been more than one "Architect" to complete the creation. Mazzini was the man who put the Risorgimento in motion of Italian unity. He contributed greatly in promoting national feelings among Italian in 1831. He played an important role in propaganda. He built the ideas of nationalism to the Italians so that most of the Italian knew about the ideas of unify, and they wished to unite their own country. Mazzini believed that without people's support, he would never success in unifying Italy. He set up the society of 'Young Italy' in 1831. Its chief aim was to unite Italy under a republic. But the failure of the 1820 and 1830 revolts was due to the misdirection of the revolutionary elements. So he suggested that to attain unity, both education and insurrection were equally important. He also urged his follower to co-operate the workers people and try to envisage a sense of unity among them. By 1833, membership of 'young Italy' had risen to 60000. In 1833, Mazzini attempted a rising in piedmont against King Charles Albert but it failed. ...read more.

He had appointed Cavour as prime minister and gave him full support. His decision to appoint Cavour marked a turning point in the Italian unification movement because Cavour had helped him a lot in the unification, such as internal reforms and foreign aid etc. This showed that Victor Emmanuel II was good at personal matters. He secretly encouraged G. Garibaldi in the conquest of Sicily and Naples and led the invasion of the Papal States. It seems that King Victor Emmanuel was a skilful diplomat too. By 1860, most of Italy had come under his rule, and in 1861, he was proclaimed the king of Italy. In 1870, he made Rome his capital. The Italy Unification was completed. This showed that he was smart enough to quiet down the civil resisted power He was clever enough to unify a completed Italy. In conclusion Cavour was a great "Architect". However there were many "Architects" that also contributed to the unification of Italy. The sword, pen and the mind recreated a new Italy. They had turned Italy from 'geographical expression' to a unified country. They had all rewritten the history of Italy. Therefore the real question is to who was the most important and successful of the four main "architects". Garibaldi would have to be considered the most important and successful exponent in the unification of Italy. His combination of political adeptness, charismatic leadership and military competence played a major role in first conquering and unifying the South then prompting the unification of Italy as a whole. Mark Strachan 12.6 ...read more.