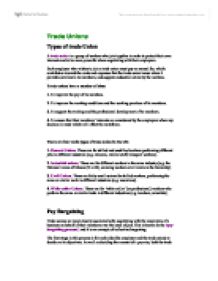 Trade Unions Types of trade Union A trade union is a group of workers who join together in order to protect their own interests and to be more powerful when negotiating with their employers. Each employee who wishes to join a trade union must pay an annual fee, which contributes towards the costs and expenses that the trade union incurs when it provides services to its members, and supports industrial action by the workers. Trade unions have a number of aims: 1. To improve the pay of its members. 2. To improve the working conditions and the working practices of its members. 3. To support the training and the professional development of its members. 4. To ensure that their members' interests are considered by the employers when any decision is made which will affect the workforce. There are four main types of trade union in the UK: 1. General Unions. These are for skilled and unskilled workers performing different jobs in different industries (e.g. cleaners, clerical staff, transport workers). 2. Industrial unions. These are for different workers in the same industry (e.g. the National Union of Miners (N.U.M), covering workers at all levels in the hierarchy). ...read more.

Industrial Action If the negotiation process collapses (whether it was negotiating for pay or for working conditions), then there are a number of different methods of industrial action which the trade union can propose to its members that they use in order to achieve their demands : 1. Non co-operation. Refusing to attend meetings and use new machinery or processes. 2. Work to Rule or 'Go Slow'. Refusing to perform any tasks not in the contract of employment and keeping the output of products to a minimum. 3. Overtime Ban. Refusing to work any hours over and above the required weekly number of hours. 4. Picketing. Standing at the entrance to the workplace and not allowing any person or vehicle to cross the 'picket line' and enter the workplace. 5. 'Blacking'. Refusing to deal with certain employees or suppliers because they have refused to participate in the industrial action. 6. Strikes. This is often the last resort for a trade union. It involves the employees stopping their work, leaving the workplace and refusing to return. Whichever method of industrial action is implemented, the trade union and the employees are using it in an attempt to reduce output (therefore also reducing sales and profits) ...read more.

A.C.A.S. representatives can be invited into a business by the two feuding parties (employers and trade unions) in order to offer their advice to both parties on the industrial unrest and the 'best' way to proceed in order to settle the unrest. Conciliation is an attempt to get the two sides in an industrial dispute to resolve their differences. A conciliator listens to the arguments of both sides, and then tries to encourage the trade union and the employer to negotiate and compromise so that they can reach a solution that is acceptable to both parties. Arbitration is the process of resolving an industrial dispute by using an independent person to decide the appropriate outcome. The arbitrator will look at the arguments put forward by both parties, and then he will arrive at a decision. The decision can be legally binding on both parties if this was agreed prior to the arbitrator's decision. Pendulum arbitration is a type of arbitration in which the arbitrator will decide completely in favour of one party or the other, with no compromise or negotiation being allowed. It is likely, therefore, that both parties (the employers and the trade union) will make their demands more conservative and realistic than if the arbitrator was allowed to choose an outcome which was somewhere between the two. ...read more.