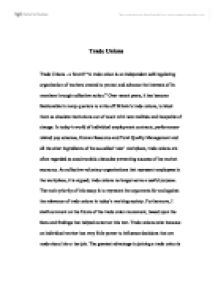 Trade Unions Trade Unions - a future? "A trade union is an independent self-regulating organization of workers created to protect and advance the interests of its members through collective action." Over recent years, it has become fashionable in many quarters to write off Britain's trade unions, to label them as obsolete institutions out of touch with new realities and incapable of change. In today's world of individual employment contracts, performance-related pay schemes, Human Resource and Total Quality Management and all the other ingredients of the so-called 'new' workplace, trade unions are often regarded as anachronistic obstacles preventing success of the market economy. As collective voluntary organizations that represent employees in the workplace, it is argued; trade unions no longer serve a useful purpose. The main priority of this essay is to represent the arguments for and against the relevance of trade unions in today's working society. Furthermore, I shall comment on the future of the trade union movement, based upon the facts and findings that helped construct this text. Trade unions exist because an individual worker has very little power to influence decisions that are made about his or her job. The greatest advantage in joining a trade union is because, by doing so, individuals possess more chance of having a voice and influence in their place of work. By joining forces with other workers, an individual's opinions and beliefs regarding their job will also be voiced by other union members, thus creating a stronger stance against management, if needed. ...read more.

Individuals can be represented by trade unions when they encounter problems at work. If an employee feels that they are being unfairly treated, he or she can ask the union representative to help sort out the difficulty with the manager or employer. Apart from negotiation and representation, many other benefits can be gained by joining a trade union. One of these benefits is the fact that unions can offer their members legal representation. Usually this is to help people to get financial compensation for work-related injuries, or to assist people in taking their employer to court. Members can also take full advantage of the wealth of information which can be obtained from unions, of which can prove invaluable. The kind of information available covers a range of issues i.e. the length of holiday that an employee is entitled to each year, the amount of pay an employee would be entitled to if they took maternity leave, and how training can be obtained at work. "During the last ten years, trade unions have increased the range of services they offer their members. These include: education and training - most unions run training courses for their members on employment rights, health and safety and other issues. Some unions also help members who have left school with little education by offering courses on basic skills and courses leading to professional qualifications. legal assistance - as well as offering legal advice on employment issues, some unions give help with personal matters, like housing, wills and debt. ...read more.

It can also be argued that actual legal representatives, or solicitors, can perform the same functions, but I disagree. Unlike solicitors, who have to deal with a wide range of situations, trade unions are a more convenient source for workers to turn to. They are ideally placed within the organization, and they are totally dedicated to the main concern, which is to protect and advance the interests of its members, the workers. I therefore agree with the trade union movement, and believe that they will exist for as long as there are jobs. How successful they are will depend on various factors. A progressive fall in the number of jobs in manufacturing industries in the future, as in the past, will constitute the decline of trade union membership. So will unemployment, which is currently high by historic standards. Another factor is the fall in traditional full time employment, and an increase in part time and temporary workers, who are less likely to join unions. An increase in the proportion of the workforce employed by small companies where it is often difficult for unions to organize, as well as hostile legislation will all comprise possible obstacles for the trade union to overcome. I am, nevertheless, inclined to believe that the future of the trade union movement lies with its past. It has managed to overcome major obstacles in its time, and has come through it damaged, but still existent. For this reason, I feel that Britain's trade unions will remain adaptable and pragmatic enough to grow once again into this new century, and into the next. ...read more.